QLogic issues mournful prognosto ahead of next numbers

QLogic expects a significant shortfall in its latest quarter’s results compared to expectations set a couple of months ago and has issued preliminary numbers to warn the financial markets.

The expectation was for $124 million to $132 million revenues. Instead the prelim number is $113 million, well down, and comparing poorly with the year-ago quarter’s $119.4 million - 5.4 per cent lower in fact.

QLogic expects to make, hopefully, a small profit, with GAAP net income per diluted share in the range of $0.00 to $0.01.

Why the slump in revenues? Q fingered a general server and storage array sales slowdown, saying its results reflected “lower than expected demand due to general weakness in the Company’s traditional enterprise server and storage markets, and a build-up of inventory at certain of its OEM customers due to a slower next-generation server transition in enterprise environments.”

That would be the transition to Intel’s Grantley CPUs. Stifel MD Aaron Rakers points out:

“We are disappointed with the level of business activity during the quarter. We will work through these headwinds, leveraging our technologies and solutions to expand our addressable market opportunities.” 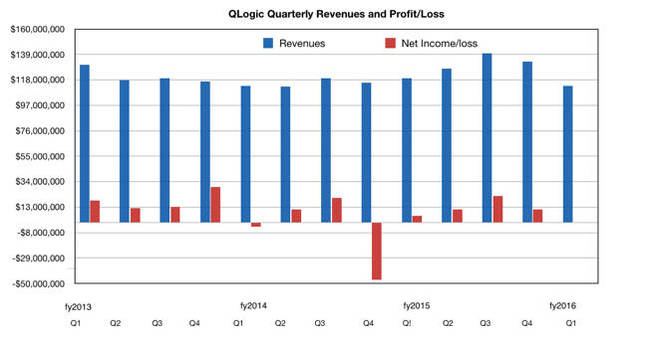 His customers mostly buy QLogic gear to connect servers with storage. Do Rampalli's remarks mean anything other than: "We'll wait until our customers start buying servers and storage arrays again"?

Probably not unless the second and third quarters go down the revenue toilet as well.