No medals for the wrong decision

Batchelor's position is high pressure: yes, closing the barrier has the potential to save London and her people but getting it wrong would also be a disaster, if of different proportions.

“We’ve got to be certain of what we are doing to minimise the disruption,” Batchelor tells me. “It’s got to be based on the information, and there’s no medals for getting this wrong.”

The Port of London, with offices on the opposite bank, annually contributes £3.4bn to the national economy. Ships passing through the Barrier to the Port of London handle 50 million tonnes of goods, 70 independent wharfs and terminals along 95 miles of water. When the barrier goes up, that lot comes to a halt. That network of other barriers along the Thames would close, too.

If the gates close, Batchelor's team must get on the phone to the Port of London Authority, London Transport, emergency services, local authorities, the Woolwich ferry, plus 36 other floodgates and 400 smaller structures that comprise a flood-defense ring with the barrier including the Dartford Barrier and Tilbury Dock. 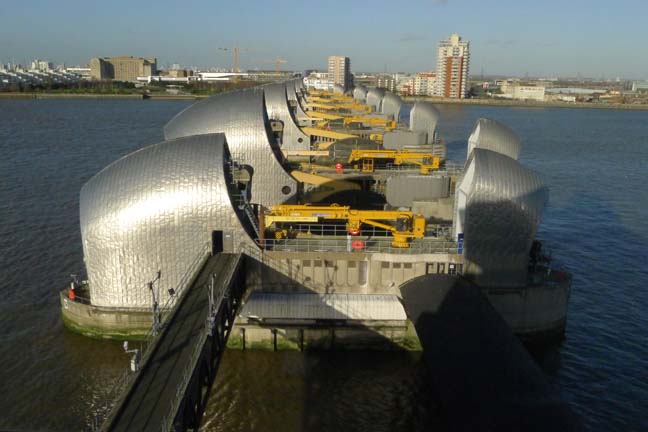 View from the bridge: view of the Thames Barrier from inside the control tower

The barrier gets the attention but it couldn't work on its own. “People get confused – they think it’s just the Thames Barrier that’s doing the job – it’s the complete system, it’s like a chain. Take out one of the links and you will have flooding,” Batchelor said.

Any decision to operate the thousands of tonnes of machinery sitting out there in the river is based on an expert reading of incoming data from weather forecasts and situations on the ground. Data read outs are displayed on a bank of flat monitors currently wiggly displaying coloured lines.

Some of the feeds come from five-day ensemble forecasts crunched by Met Office’s supercomputers in Exeter. Ensemble forecasts give you not one but a variety of results based on different factors. Forecasts are run for three days, to give greater detail.

The results are mapped against knowns, such as scheduled sea tides and fluvial flow up the river. Forecasts are supplemented with data from monitors ranging from up in the North Sea to Teddington Weir in West London, the last tidal point on the Thames.

The team sifts for signs of surges mixed with a high tide and low-pressure in the North Sea – the fatal mix of 1953. They look, too, for any excess rain running off land into the river, as occurred in 2014.

Closure is triggered when a combination of high tide forecasts in the North Sea and high-river flows Teddington Weir – 22 miles from here – indicate water levels would exceed 4.87m in central London.

In winter 2014, the barrier closed nine times because of tidal surges and 41 because of high river flow, essentially water running off into the Thames.

The strategy was to raise the barrier's gates after low tide to stop water coming back upstream from the North Sea and thereby creating an empty reservoir behind the gates. Run off from the land would fill this reservoir so that, rather than hit a wall of tidal inflow from the North Sea, it could be released in a controlled way after the next high tide.

Coming back to the now, Batchelor points to a bulge of coloured lines on one screen: it represents a tidal surge as recorded by various tidal markers at different points along the North East coast.

Things are quiet today but in Winter 2014 it was different: 38 cubic metres of water a second were flowing over that Teddington tidal outpost. The weekend before my trip was wet, 100 cubic metres a second. January to March 2014 hit 535 cubic metres per second, although history records even bigger numbers, up to 800 in 1894. However, these lasted for just a few days.

Directly opposite us on this bridge are the systems responsible for the remote control of those gates down in the river. When it unofficially opened in 1982, the operations centre resembled the control room of a power station that used levers and knobs and was full of dials.

Instructions to the barriers gates were sent via thousands of relays. The only computers were a VAX machine running PDP-11 code for forecasting, and a Commodore Pet with a five-and-a-quarter-inch floppy drive that ran planned maintenance.

The Bakelite and white-coat era systems were phased out in the 1990s, for the first PC-based systems controlled via custom keyboards.

Today, it’s Windows 7 PCs and Windows Server 2008 R2 systems that talk to the industrial plan on the barrier's piers to raise and lower the gates. The network and servers are mirrored and a RAID 6 blade server with several terabytes of storage records every piece of data generated.

These computers control a system of moving gates that are unique.