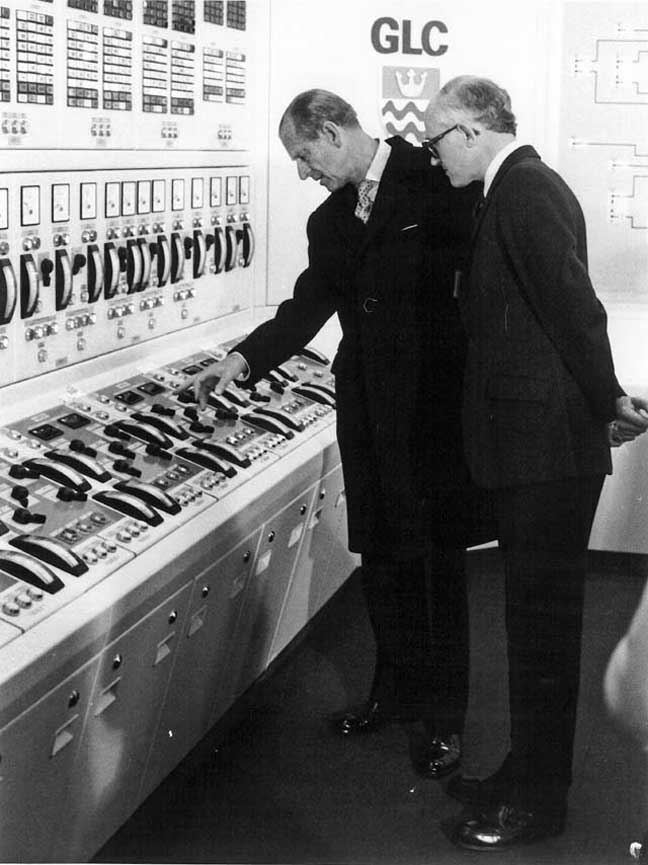 The Eastern Scheldt, South-west Netherlands, and the St. Petersburg flood use concrete piers, sluices and dams while the barrier in Venice is tripped automatically. Permanent defences couldn’t have worked on the Thames because of the river's importance to all that commerce going in and out of the Port of London, it would have blocked ships. A system tripped by tidal pressure was impossible because of the variance of rainfall that the UK receives and the fact the Thames has a tidal range of seven metres.

The systems up here control six rising sector gates in the centre of the river and a further four falling radial gates sitting on the shallow north and south banks. Instructions are relayed to a plant that does the lifting on nine concrete piers, seven of which are topped by those silver-cloured shells.

A single engineer could in theory operate all the Barrier’s gates but in practice there’s always two on duty, as operating the gates isn’t as simple as clicking “OK” on a screen dialogue. You need to step through a series of sequenced and connected moves beginning with turning on power packs that control a series of arms and levers out on those islands responsible for raising and lowering the gates. This is done gate by gate.

Parameters must be satisfied, such as packs running, the correct selections made, direction (open or closed) selection of the correct gate, and so on.

On my trip I met one of those whose jobs it is to operate the gates, control-room shift engineer Tony Davies. “Tony has the intellect to know what to do if we need to run down that series of circumstances,” Batchelor tells me.

There’s different ways to close the gates; using the main control and local, using duty and stand-by power pack, or manually on the barrier should systems up here fail and should there be a major power outage. There are monthly test closures, with gates operated once a fortnight.

“On those, we go through all those options. If we didn’t, well, we are all creatures of habit and would do it one way. It’s my way of doing QA,” Batchelor said. 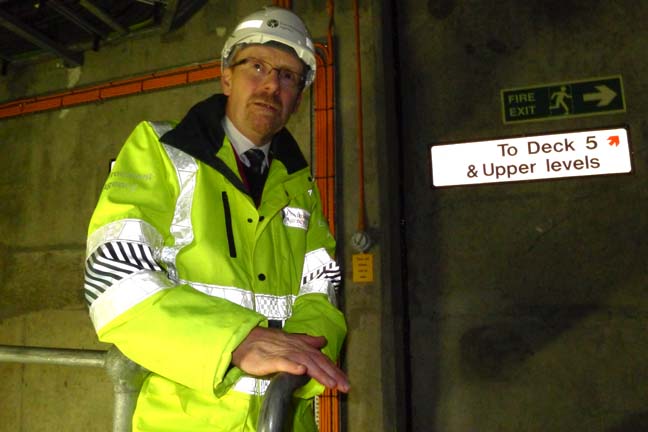 Tidal defenses operations manager Batchelor, inside the Barrier and beneath the waterline, photo: Gavin Clarke

“We need Tony as an engineer to know what it is he’s pressing, so he’s not just following a script. We need to have his intelligence to know that when, say, we come to step number five what number five does rather than moving onto number six,” Batchelor told us.

The flight desk Tony pilots is sacrosanct: there's no internet connection and – sorry codeheads – no upgrades or fiddling on live systems in case bugs are introduced. This system hasn’t been touched in four years with changes only made when there’s a systems upgrade or a need for a re-think.

Arguably the biggest change was the switch to computers in the 1990s with the move away from Bakelite and thousands of relays. A computerised system based on those used in oil exploration in the North Sea was constructed using custom keyboards and controls that evolved into a supervisory control and data acquisition (SCADA) system of standard mouse and keyboard UI.

Today it's a custom-built point and click interface. Opening the gate involves satisfying a series of logical sequences, from getting power packs running through to moving the gates, one at a time, gate by gate. Closing one gate takes 15 minutes and shutting the lot takes an hour and a half.

Change is in the wind for this lot: the plant out in the piers is being replaced while the aging control-room software is ready for an update. A pilot is underway looking at "tighter integration" and use of Windows Server 2012.

The juice for this lot, meanwhile, comes courtesy of the National Grid: two sources on the north and the south bank for redundancy plus there's a trio of 1.5MW generators on site and a rotary flywheel that serves as a UPS in the event of a blackout and ensures uninterrupted supply during any outages.

The flywheel replaced hundreds of batteries and ensures uninterrupted supply during a total loss of mains power. There’s been six blackouts in the south east of England during the barrier’s history.

Next page: Doors to manual
Page: