Pic Physicists at CERN's Large Hadron Collider say they have discovered the pentaquark – a class of subatomic particle never seen before.

"The pentaquark is not just any new particle," said LHCb spokesperson Guy Wilkinson.

"It represents a way to aggregate quarks, namely the fundamental constituents of ordinary protons and neutrons, in a pattern that has never been observed before in over fifty years of experimental searches."

The LHCb collaboration team has submitted a paper reporting these findings to the journal Physical Review Letters.

Speaking of the new particle, Wilkinson explained that "studying its properties may allow us to understand better how ordinary matter, the protons and neutrons from which we’re all made, is constituted".

"Benefiting from the large data set provided by the LHC, and the excellent precision of our detector, we have examined all possibilities for these signals, and conclude that they can only be explained by pentaquark states," said LHCb physicist Tomasz Skwarnicki of Syracuse University.

"More precisely, the states must be formed of two up quarks, one down quark, and one charm quark and one anti-charm quark."

"The quarks could be tightly bound," said LHCb physicist Liming Zhang of Tsinghua University, "or they could be loosely bound in a sort of meson-baryon molecule, in which the meson and baryon feel a residual strong force similar to the one binding protons and neutrons to form nuclei." 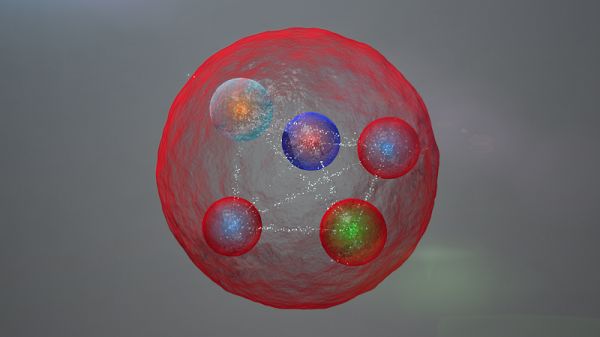 Aside from the above tightly bonded pentaquark, quarks might also be assembled into a meson (one quark and one antiquark) and a baryon (three quarks), weakly bound together, as in our index image. (CERN / LHCb Collaboration)

In 1964, American physicist Murray Gell-Mann made the wild suggestion that a category of particles known as baryons – which includes protons and neutrons – are themselves comprised of three fractionally charged objects called quarks, and that another category, mesons, are formed of quark-antiquark pairs, informeth us do the LHC Boffins.

Gell-Mann would later be awarded the Nobel Prize in physics for this work in 1969, and played on both the nuances of humility and a famous Isaac Newton quote, declaring: "If I have seen further than others, it is because I am surrounded by dwarfs."

The quark model which he proposed also allowed the existence of other quark composite states, including pentaquarks, which are composed of four quarks and an antiquark. However, no conclusive evidence for pentaquarks had been seen until now, reckon LHC's boffins, who explain:

LHCb researchers looked for pentaquark states by examining the decay of a baryon known as Λb (Lambda b) into three other particles, a J/ψ- (J-psi), a proton and a charged kaon.

Studying the spectrum of masses of the J/ψ and the proton revealed that intermediate states were sometimes involved in their production.

These have been named Pc(4450)+ and Pc(4380)+, the former being clearly visible as a peak in the data, with the latter being required to describe the data fully.

This is not the first time the pentaquark has been discovered, however, as a handful of experiments in the noughties reported results consistent with the existence of pentaquark states. Subsequent experiments and a more thorough gander at the data, however, revealed the results were merely statistical effects.

Where the LHCb experiment manages to differ is that it has been able to "look for pentaquarks from many perspectives, with all pointing to the same conclusion".

"It's as if the previous searches were looking for silhouettes in the dark, whereas LHCb conducted the search with the lights on, and from all angles," surmise the black hole dodgers.

After a bit of a rest, the LHC was fired up again back in June, replete with its sexy new kit. The new data it is collecting, and will continue to collect in run two, will allow the boffins to make progress on Zhang's questions. ®

Why not check out some classic Reg LHC coverage from the past - for instance our visit to the Collider a few years back. Or the mysterious case of the birdy bread bomber who took out the entire mighty machine.