Did MARS once have OCEANS? Curiosity discovers continental crust

NASA's nuclear-powered Curiosity rover has aimed its ChemCam laser at some unusually light-coloured rocks on Mars and discovered surprising similarities between them and the rocks of Earth's granitic continental crust.

The evidence of a "continental crust" on Mars is a huge discovery from the space-tank, now rumbling over the red planet's cotta surface with an unbroken arm.

Using the new data from the Mars-prowling machine, top boffins have published new research in Nature Geoscience. The article is titled "In situ evidence for continental crust on early Mars" and boasts a hitherto impossible glimpse at the red world's magmatic history.

"Along the rover's path we have seen some beautiful rocks with large, bright crystals, quite unexpected on Mars," said Roger Wiens of Los Alamos National Laboratory, lead scientist on the ChemCam instrument.

"As a general rule, light-colored crystals are lower density, and these are abundant in igneous rocks that make up the Earth's continents," he added.

The Chemistry and Camera, or ChemCam, uses its powerful laser to vapourise materials from areas smaller than a single millimetre on Mars and analyse their elemental composition.

An on-board spectrograph provides detail about minerals and microstructures in rocks by measuring the composition of the resulting plasma - an extremely hot gas made of free-floating ions and electrons.

ChemCam can resolve features five to 10 times smaller than those visible with cameras on NASA's two Mars Exploration Rovers that began their journeys across our neighbour planet in January 2004. 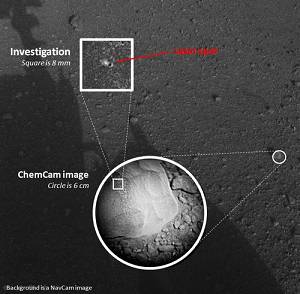 This composite image and magnified insets depicts the first laser test
by the ChemCam, instrument aboard NASA’s Curiosity Mars rover.

Mars has been viewed until now as an almost entirely basaltic planet, with igneous rocks that are dark and relatively dense, similar to those found at the bottom of Earth's oceans. The new discovery by Curiosity indicates that the red planet also has areas more similar in composition to Earthly landmasses.

This doesn't guarantee, of course, that Mars once had oceans like those of Earth, though some scientists do speculate that it was once a much wetter world. Nonetheless, it's an interesting discovery in its own right.

Curiosity, when not investigating alien objects or fossils has been rummaging about the Gale crater, which was excavated about 3.6 billion years ago into rocks of greater age, and provides a window into Mars' primitive crust.

The crater walls provided a natural geological cut-away view for between one and two miles down into the crust. Access to some of these rocks, strewn along the rover's path, has provided critical information that could not be collected by other means, such as by orbiting satellites. ®