Pics NASA has revealed the first high-resolution photograph of Pluto's surface, and the first proper picture of its largest moon Charon – and they are frankly very strange indeed.

The Pluto snap shows ice mountains 11,000ft tall, and on both pics there are perplexing signs of geological activity – perhaps even cryovolcanoes spewing material over the surface of the dwarf freezeworld and its moon. 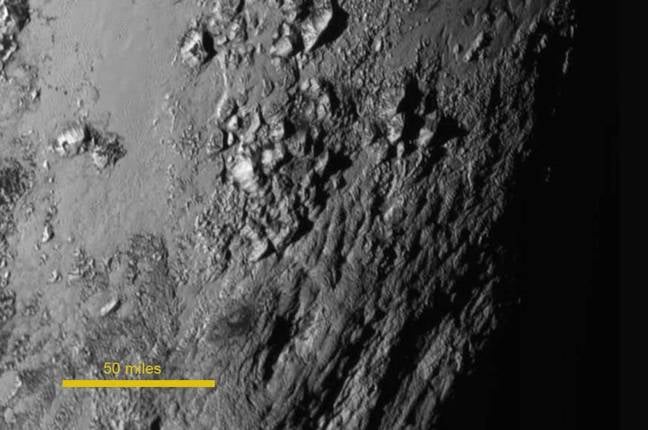 A little before 0600 EST (0100 UTC), the New Horizons probe fired a two-hour data dump back to Earth, including the first high-resolution image of Pluto and the first close-up picture of Charon. What they show is that both bodies are geologically active – something that wasn't thought possible in such small cosmic objects.

"In the first picture from Pluto, which covers around 150 miles square, we have not yet found a single impact crater on the surface," said John Spencer, one of the lead scientists on New Horizons.

"This means it is a very young surface, because Pluto is being impacted all the time by objects from the Kuiper Belt," and he estimated that means the surface material is, at most, 100 million years old, and possibly much more recent.

The team had been expecting to find the surfaces of both Pluto and Charon to be pockmarked with impact craters, but the lack of them suggests that there is enough heat in both bodies to power either geysers or cryovolcanoes that periodically cover up the craters with fresh material.

We've seen this activity in smaller bodies than Pluto, but only on moons orbiting gas giants. It had been thought that the immense gravitational pressures of these moons' host planets kneaded the interior with tidal forces that keep them geologically active.

But Pluto and Charon have no equivalent body, and are too small to have a tidal effect on each other. That suggests that either there are enough radioactive elements in the body's cores to heat up the interior and produce geological activity, or there are large lakes under the surface that are slowly cooling and keeping them warm. 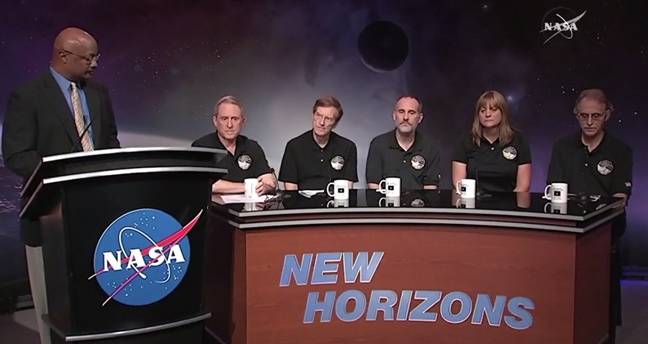 Press conference ... The New Horizons team may have managed a few hours sleep between them

The mountains of Pluto

The image also shows massive mountain ranges the size of the American Rockies, but around 11,000 feet tall. These are composed almost entirely of water ice, with a light dusting of nitrogen and methane ice veneering the surface.

"We can be very sure that water is there in great abundance," said Alan Stern, principal investigator of the New Horizon’s team. "The volatiles are just a frosting."

He added that the amount of nitrogen found was surprising. Pluto is losing its atmosphere and nitrogen should be one of the first elements lost, but there's much more about than there should be. This suggests there may be upwellings of nitrogen from as-yet unseen features on Pluto's surface, he explained.

The high-res image comes from the base of the large, bright feature on Pluto's surface that has been referred to as "the heart' informally. NASA has now renamed it the Tombaugh Regio, after Clyde Tombaugh, Pluto's discoverer – an ounce of whose ashes form part of New Horizon's payload. 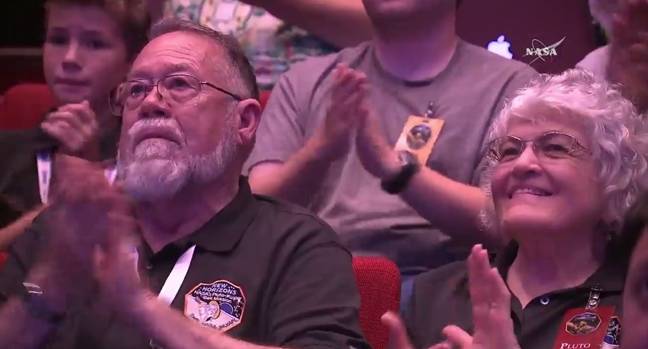 Meanwhile, the long dark patch around Pluto that has been dubbed "the whale" has also been renamed by NASA, albeit informally. The team now refers to it as Cthulhu Regio, in honor of HP Lovecraft's fictional deity.