Pics NASA has released the latest data sent back by its New Horizons probe and it includes images of smooth, segmented plains, possible hydrocarbon deposits and our first look at Pluto's moon, Nix.

Alan Stern, principal investigator of the New Horizons team, explained at a press conference on Friday that NASA had received about 1 per cent of the spacecraft's collected data and that by next Friday's announcements it will have received around 5 or 6 per cent.

Among the latest images were two more high resolution sections of Pluto's surface, captured close to the edge of the heart-shaped feature – now named Tombaugh Regio – that dominates the side of Pluto that we've seen so far.

The pics show a small range of mountains to the south and a vast, smoothish plain extending hundreds of miles across the surface. 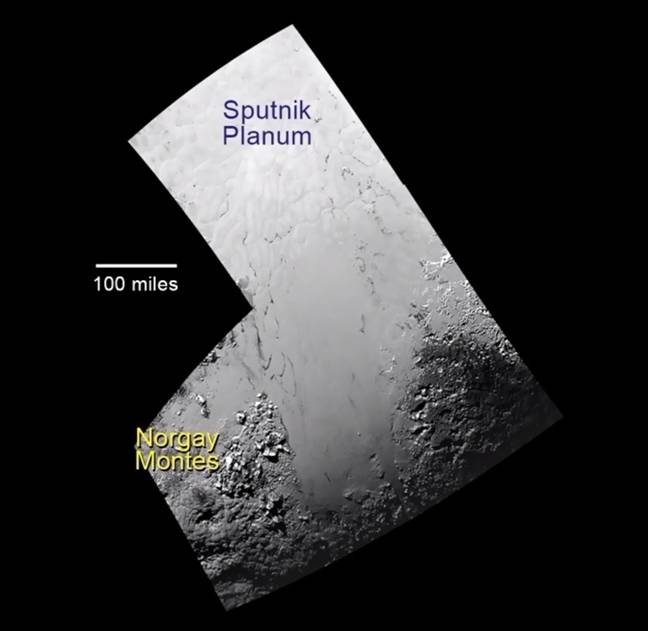 The plain, informally named Sputnik Planum, is riven by troughs that divide it into rough polygons similar to those seen near Mars' North Pole. Some of the troughs contain hummocks of dark material, and on the southern border of the plain there appears to be a series of tiny pits, although these might actually be artefacts caused by image compression.

Mud or oatmeal: science will decide

Jeff Moore, leader of the New Horizons geology, geophysics, and imaging team, said there were two competing theories about the appearance of the terrain.

One was that the troughs were formed by the surface of the plains contracting, like mud drying. The other was that the plains are the result of material bubbling up from underneath, like bubbles in oatmeal.