Happy NukeDay to you! 70 years in the shadow of the bomb post-Trinity

Top nuke boffin calls for new test, but not for the reason you'd think

Pics and vid At 5:30am on July 16, 1945, American and British scientists watched the detonation of the world's first nuclear weapon and mankind entered the atomic age.

The Trinity test was the high point of the Manhattan Project, the Allied powers' plan to develop an atomic bomb before the Germans or Japanese managed it. The Gadget, as it was known, was put atop a 100-foot tower (with mattresses strewn around the base in case it fell off) and detonated, releasing the same energy as 20,000 tons of TNT.

"I am become Death, the destroyer of worlds," Dr Robert Oppenheimer, sometimes called the father of the atomic bomb, later said, recalling the sight with a quote from the Bhagavad Gita.

Oppenheimer named the test site Trinity as a salute to the seventeenth century writer John Donne, and the name was also given to the green glass formed by superheated desert soil on the site – trinitite.

As scientific experiments go, the Trinity test wasn't even remotely rigorous – the scientists had little idea what the strength of the explosion would be and ran a sweepstake on the final result. Some thought it would be a fizzle, while others had more dire predictions.

The Nobel Prize-winning physicist Enrico Fermi even took bets on the likelihood that the bomb would ignite the nitrogen in the atmosphere and cause a global catastrophe, before he was asked to stop because it was making people nervous. The future Nobel laureate Hans Bethe had calculated that the chance of such a disaster was vanishingly small and, anyway, who would have collected if the worst happened.

The test took place at the Alamogordo Bombing and Gunnery Range in New Mexico and the 400 or so observers were stationed nine kilometers away from the blast site. As the device detonated, Fermi tossed strips of paper into the air to see how far the blast wave pushed them, and thus calculate the device's power.

The observers on the ground, and those in the air above the test site described the explosion and fireball as shining brighter than the midday sun and the detonation was heard hundreds of mile away. The Army put out a press release later in the day saying that a weapons store had exploded, and warned people to stay away as poison gas canisters had been included in the inferno.

"There was a blinding flash of light that lighted the entire northwestern sky. In the center of the flash, there appeared to be a huge billow of smoke. The original flash lasted approximately 10 to 15 seconds," General Leslie Groves wrote in his memo to the War Department.

"As the first flash died down, there arose in the approximate center of where the original flash had occurred an enormous ball of what appeared to be fire and closely resembled a rising sun that was three-fourths above a mountain. The ball of fire lasted approximately 15 seconds, then died down and the sky resumed an almost normal appearance." 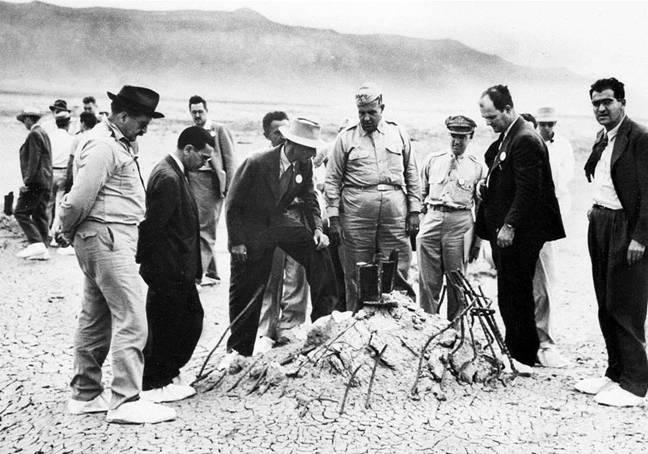 Oppenheimer and Groves examine what was left of the test tower

Others would soon see a similar sight, although in less happy circumstances. The Fat Man bomb dropped over Nagasaki under a month later was almost identical to the Gadget and was the last thing between 40,000 and 80,000 Japanese people saw.

Next page: Feeling the effects
Page:

Minister laments Dell, HPE and pals have the market locked up and little incentive to change
Systems8 Aug 2022 | 1

Interview What it's like bargaining with criminals ... and advising clients suffering their worst day yet
CSO6 Aug 2022 | 27

Find it next to the Cybertruck, Boring tunnel maps, Twitter acquisition and my sense of commitment
Personal Tech5 Aug 2022 | 61