The best thing for the web since Mozilla forked Netscape

Weary old web warhorse Internet Explorer (known to thousands of Reg readers' spouses and parents up and down the land simply as "the internet") is destined soon for the dustbin of tech history.

After decades of dominance through proprietary lock-in and anti-trust-busted software bundling, the monster lurking in web developer nightmares will no longer be the default browser for Windows.

Windows 10, due in two weeks, will use Microsoft's latest browser creation: Edge.

Fear not IE fans, the browser will still be around for "compatibility" reasons. Which means if you have some kind of ActiveX-reliant spaghetti code nightmare of an intranet site that only works in IE 8 and below, there will still be access it with IE in Windows 10.

For everyone else, though, upgrading to Windows 10 will mean moving to Microsoft Edge and that will hopefully turn out to be a big win, not just for users but the web at large. Well, assuming people actually upgrade to Windows 10.

Edge has been released in limited preview form and based on that, and statements from Microsoft, is seems safe to say that Edge is everything IE is not: fast, more secure and considerably more compliant with the HTML standards that define the web.

Microsoft is clearly looking for a pat on the back with regard to Edge's web standards support, but at this point you don't really get those. 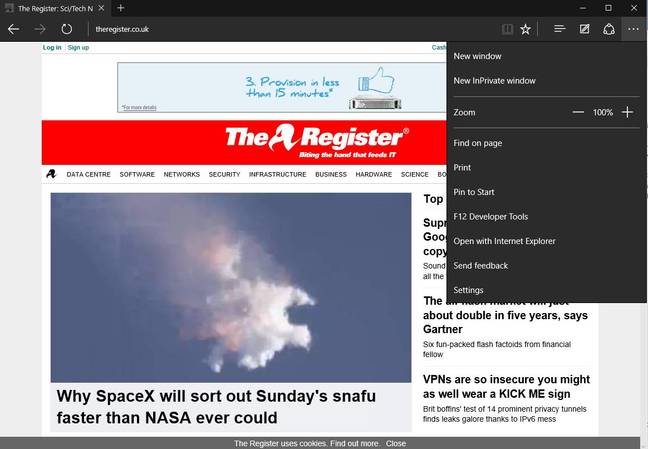 Edge: better than IE on standards, but no Chrome or Firefox

Supporting web standards is a foregone conclusion on today's web. In fact ever since Firefox first started pushing web standards support as a feature, only one browser has failed to get all the way on the standards bandwagon. Can you guess which?

Microsoft has improved IE's standards support over the years, but it still lags behind all its competitors. Edge has a lot of new features for users, like a built-in reader mode, integration with Microsoft's Siri-like digital assistant called Cortana, and some other great user-oriented tools that put Edge way ahead of IE.

From a developer perspective, though, Edge isn't quite as appealing.

It is built on a fork of the Trident rendering engine that powers IE. Microsoft said it's stripped out all that legacy code and, certainly, early benchmarks would seem to indicate it's found a way to speed things up. But when it comes to the standards support developers are accustomed to, Edge reveals its Trident underpinnings.

The html5test.com suite currently lists Edge as supporting 402 of the 555 items in the test. That's respectably better than IE 11 that scores just 336. At the same time it's a long way from Chrome and Firefox, which score 530 and 467 respectively.