Dough! Dominos didn't register dominos.pizza – and now it's pizz'd off 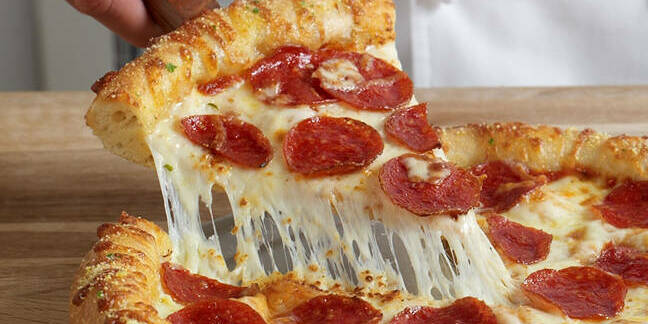 Pizza emporium Dominos has filed a formal request to get hold of the domain name dominos.pizza after it incomprehensibly failed to register it late last year.

The The equisectioned-circle grease-cheese maker paid the National Arbitration Forum $1,300 (£835) on Monday to assess its rights in the name – a claim it is likely to win given its trademark and brand awareness.

Dominos did have the opportunity to buy the domain for just $70 (£45) in December last year during the "sunrise" period, where trademark holders have exclusive access to internet addresses for a period of typically a month.

When the company didn’t register the domain, it was picked up on 7 December 2014 by one CJ Sculti, who appears to be CEO of hosting company Data Wagon. No website currently exists at the address.

So why did Dominos not register a domain that was so obviously useful to it? And why has it taken the publicly listed company six months to act?

We suspect it has a lot to do with the recent bloomberg.market controversy where a fake news story planted on the domain caused Twitter's share price to jump. The high-profile cybersquatting has caused a rapid re-evaluation of brand names by many large corporations in the new internet space where 500 new endings have been added in the past year alone.

Many companies have decided to give the expansion of internet endings a wide berth – leading to very disappointing sales figures for the companies that were hoping to cash in on the expansion. With new top-level domains added every week, companies have mostly decided not to register and maintain hundreds of new domain names when their use remains low.

That said, when Dominos heard that a new .pizza top-level domain was being added, you would imagine it was commonsense for one of the world's largest pizza companies to register it. While it's unlikely that dominos.horse or dominos.dental is going to be of much value, it's not hard to see how dominos.pizza might have value.

However, the prevailing attitude of many brands has been to do nothing – even when they have registered their own name as a standalone internet top-level domain – and act only when there is a problem.

The bloomberg.market situation has changed the equation however, and now brands can see risk attached to not having a domain name that could be easily mistaken for their business.

You can imagine if CJ Sculti did set up a pizza ordering facility at dominos.pizza that he or she would be overwhelmed with orders pretty quickly. Not only would that business pull directly away from the real Dominos but it could also damage the brand if service levels were poor or the pizza was inedible [Don't you mean edible? – ed.].

The result of this re-evaluation by brands is both a blessing and a curse to the companies running the new top-level domains. The new endings are finally being taken seriously and companies are starting to see their value. That will mean greater registrations (currently there are only 3,150 dot-pizza domains, which is extremely low even for the new extensions).

At the same time, however, the new gTLDs risk becoming permanently associated with risk and cybersquatting in the corporate business mindset: something that no one in the domain name industry wants.

Either way, bloomberg.market looks set to be an example used for many years to come, both for good and for ill. ®

Roundup Plus, hackers find a safe haven in West Haven

Meanwhile, trademark holder gets hit with $50,000 for pushing its luck

Updated How someone was able to buy bloomberg.market and, er, move the market