Rocketry upstart SpaceX has said it's new "Falcon Heavy" launcher – which will be the most powerful on Earth when it comes into service – has been grounded by further delays.

The news comes as part of a briefing given by SpaceX chief Elon Musk and other company executives outlining their plans following the explosion of a smaller Falcon 9 rocket last month. The company's new Falcon Heavy design had been expected to fly in 2013 when it was first announced, but that date has moved back and it had until yesterday been expected to make its first liftoff later this year.

But now "we've de-prioritised Falcon Heavy to probably launch in the spring next year, maybe April or so,” Musk told reporters on Monday.

The planned Falcon Heavy is essentially three Falcon 9 first stages bolted together side by side, mustering a total of 27 Merlin rocket engines, with a second stage atop the central core. It is projected to be able to lift 53 tonnes into orbit, more than twice what the biggest operational rocket today - the Delta IV Heavy - can manage.

The Heavy will thus be the most powerful rocket in service if it arrives on time. If there are more years of delays, however, Musk's heavyweight will perhaps be eclipsed by the upcoming Space Launch System rocket under development by NASA and its old partners on the Space Shuttle programme. The SLS - essentially a throwaway Shuttle, comparable in size though not in lift to a Saturn V moon rocket of yesteryear - will initially be able to lift 70 tonnes to orbit. It is scheduled for a first unmanned test launch in 2018. Eventually enhanced versions of the SLS are planned to be able to haul 130 tonnes, surpassing the Saturn V's record of 118 tonnes - perhaps enough to send a manned mission to Mars in the 2030s.

In theory the US government was supposed to make a choice of superheavy lift rocket for its manned deep-space programme this year, but it would appear that the choice has been made for it in advance by NASA, the established US rocket industry which built the Shuttle, and their many political allies.

Musk and SpaceX had at once time appeared to be in with an outside chance of doing this job, replacing the cripplingly expensive 1970s-era hydrogen technology of the Shuttle and the SLS with new kerosene- or methane-powered kit. Plans have been discussed for new SpaceX "Raptor" engines, more powerful than the Merlins in the 9 and the Heavy, which could power a new class of super-Falcons - like the SLS, as big as oldtime Saturn Vs but more powerful than either.

But President Obama has proved unable or unwilling to overcome the former United Space Alliance (US aerospace giants Lockheed and Boeing, partnered in a monopoly which operated the space shuttle for NASA) and put its large workforces out of a job. Nobody seems any longer to believe that the possible Mars rockets of the 2030s could be Falcon XXs with 21st century technology in them rather than SLS Block 2s little advanced from the 1970s. 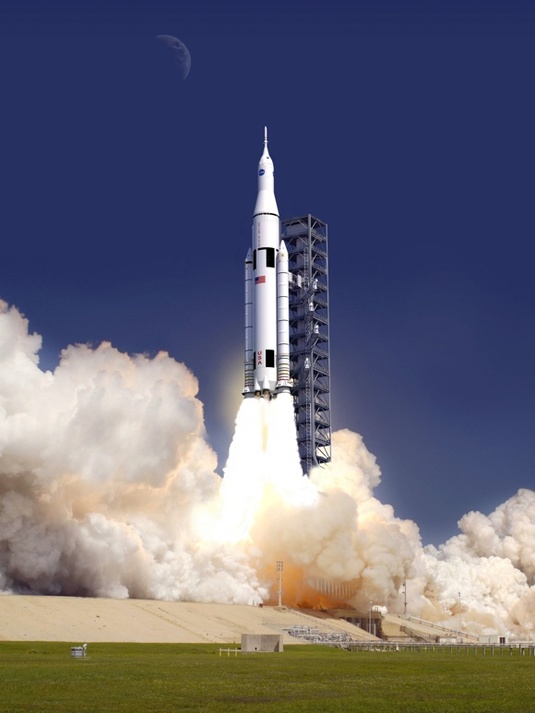 Meet the new NASA - same as the old NASA

Perhaps if the Falcon Heavy had been flying for a couple of years by now, and a Falcon 9 hadn't blown up on launch last month, that picture might be different. As it is, the Heavy will probably be doing well to step into the Delta IV Heavy's shoes lifting US spy satellites - and if it can do that, Musk will no doubt be happy enough. There's no way to know the budget of the USA's "black" or secret space programme, but it's generally thought to be a good bit bigger than the whole of NASA.

Fans of manned space exploration might be sad, though. There's doubt as to whether NASA can really afford the SLS - and a lot of doubt about how soon it can transform it from a feeble 70-tonner that would be marginal even for Moon shots into a 130-tonne lifter that might eventually put boots on Mars. There's no real doubt that a SpaceX alternative would be cheaper and probably better - though this would certainly mean a lot of job losses in the existing rocket biz.

And there's another SpaceX joker in the pack, too. All SpaceX rockets including the Heavy are planned to achieve reuseability for first stages - the expensive bits. Musk hasn't yet managed a successful recovery of an intact Falcon first stage, but he has come close and it would seem to be only a matter of time before SpaceX masters this.

The prospect of rockets which are not only much cheaper and more powerful than today's but re-useable as well is still there. As and when SpaceX gets re-useable Heavies flying - and perhaps cranks up their performance a bit - the early SLS may wind up looking not just expensive, but frankly obsolete.

Say what you like about Elon Musk, he's not boring. ®