Big Blue bafflement: Anyone in IBM Storage know which way is up?

It's getting hard to know what to say about this. IBM is supposed to be one of the best-managed corporations in the world and yet, for twenty quarters in a row, its quarterly storage revenues have declined on the annual compares.

Is this what a CADR (compound annual decline rate) looks like?
Click image for a slightly enlarged chart

We've added red circles to the top of each second quarter column in the chart above to highlight this trend for Q2. Just look at it – five straight years of decline. OK, that's Q2. What about the other quarters?

Study the chart below, and you'll see the same pattern repeat itself for the other quarters. If we chart each quarter separately, we can see the amazing regularity of IBM's storage hardware revenue decline brutally clearly: 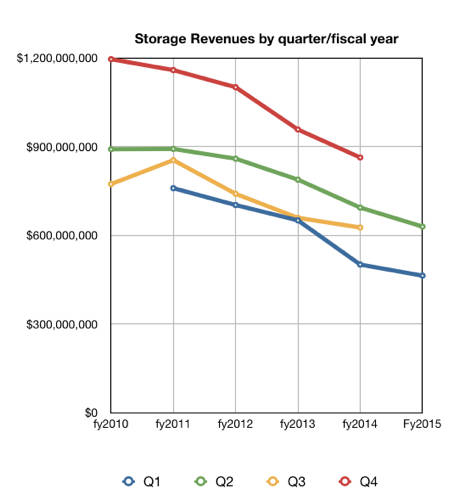 Storage hardware biz manager: "I’m going to do what I've been used to doing: bring in lower revenues than a year ago."

Supervising exec: "Sounds pretty challenging. See if you can do that."

This exchange is fictional, of course, but what the heck has IBM storage management been doing – apart from buying TMS and doing a decent job of running Storwize – that's any different from the imagined conversation above?

IBM CFO Martin Schroeter said in prepared remarks: "Our storage hardware revenue was down four percent. We again saw strong growth in our Flash Systems, with our new generation offerings introduced in the first half. This growth was once again offset by the wind down of our OEM business and continued weakness in high-end disk."

It's like HP before it bought 3PAR, facing a constant and massive draining down of its storage revenues and with no end in sight. I mean, really, FlashSystem (TMS) and Storwize? Is that it, the growth engine to rescue storage at Big Blue? It isn't working.

IBM's storage hardware biz is a tiny fraction if its $20.8 billion revenue for the quarter; small change relatively speaking.

But what was once a $982 million quarterly business in Q2 five years ago is now a $630 million business, a 36 per cent decline. It looks like a –10.14 per cent CAGR, or a 10.14 per cent CADR (compound annual decline rate). How much worse does it have to get before Ginny’s gang gets real, or has it actually gotten real already and basically given up on the business?

What else should we deduce? Because, for twenty quarters in a row, IBM's quarterly storage revenues have declined on an annual compare. What other company would put up with this? It's a Big Blue bafflement. ®

Needed: 10 brave Brits to volunteer to become ex-Big Bluers. Worst might be over, people

Is that Bullet for Me? Redundo clock is ticking for UK staff at both divisions of IBM's Services arm

Exclusive 200 or more to go as both get 45-day consultations... GTS's will kick off on 4 March

8% cloud biz growth in 12 months. Where is Red Hat when you need it?