Your poster guide: A fascinating glimpse into North Korea's 'internet'

Pic Singaporean photographer Aram Pan has been taking some fascinating photos of the world's most reclusive country, North Korea.

Alongside pictures of beautiful landscapes and rundown buildings, however, one picture caught our eye: a map of the starving country's "internet."

It sounds ludicrous, but thanks to North Korea's hermit-like existence and paranoia, beyond a few high-ranking officials, North Koreans aren't allowed to access the global public internet. All other Norks allowed near a computer have got to make do with what's on this poster, more or less.

A poster that Pan snapped when he saw it on the wall of a library in the Nork homeland, and then posted to his Facebook page, DPRK360 (DPRK is of course Democratic People's Republic of Korea aka North Korea). 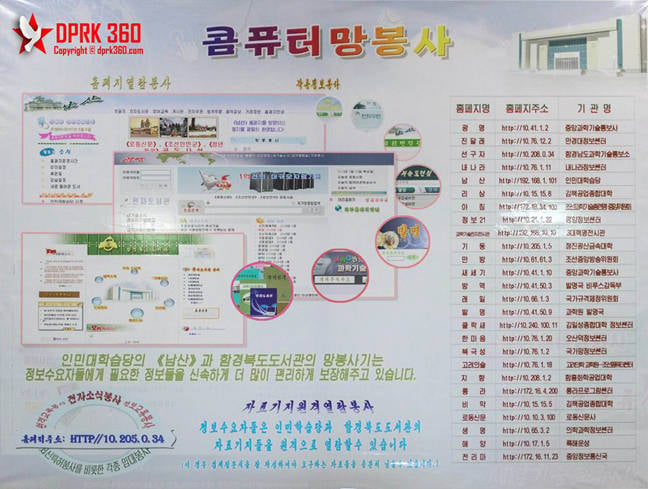 Incredibly, amid what appears to be largely pointless color graphics and screenshots, is a list of 26 network locations, which based on what we know of North Korea's network is a large chunk of its entire internet.

Or, more accurately, intranet. Because all the IP addresses listed are in private address ranges, which are unreachable from the public internet. The intranet is called "Kwangmyong" which means literally "network." It opened in 2000, and apparently has up to 5,500 websites on it. So this map must list some of North Korea's top picks.

North Korea does appear to have introduced a domain name system to translate the IP addresses to actual words (eg, 10.2.3.4 to example.com) but based on photos of North Koreans actually using their intranet, it seems as though they continue to use the IP address over Korean words. That could imply that there is only a partial DNS in place, or that with so few IP addresses, it's just easier to use the numbers.

Of course, it is possible (probable?) that North Korea's network has reserved an arbitrary range of IP addresses for its government and military, but you can bet they are not reachable from the public internet.

What is life like online in North Korea? According to reports, the intranet is free to use but somewhat limited. In all senses. You have to have permission to own a computer and you register it with the government. Only people specifically authorized by the government are allowed to get on the global internet, and they amount to a few thousand in a country of 25 million.

In case you're wondering, North Korea's official public IP address block is 175.45.176.0/22, and is run by its government telco Star. Some websites, such as the nation's news agency KCNA, are hosted from that range, and are reachable from the public internet.

North Korea also has two other blocks assigned to it: one from Chinese telco Unicom (210.52.109.0/24), and a second from Russian satellite company SatGate (77.94.35.0/24). Almost every piece of public internet traffic out of North Korea goes via the Chinese telco, leading to speculation that the Russian block is an emergency backup in case the line gets cut.

Unsurprisingly, North Korea is also a big fan of open-source software. The penniless nation even has its own flavor of Linux: Red Star OS. And it uses a cutdown version of Firefox.

The nation just held its regional elections at the weekend, and scored a 99.97 per cent turnout. Not surprising given that if you don't vote, you disappear. And there's only one party to vote for.

There is one plus side of living in Kim Jong-Un's sadistic dictatorship: it is actually possible, by law, to avoid any mention of Kim Kardashian. ®

Cryptocurrency laundromat Blender shredded by US Treasury in sanctions first