Pocket stroker gets an A8 chip boost 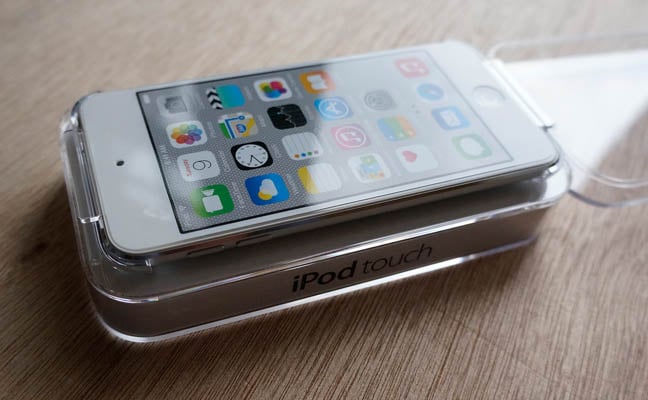 As before, the iPod touch comes mounted in a transparent box, like a glass coffin for a Viking funeral. A USB cable is included but there's no mains adaptor if you want fast charging

Except here it is revitalised, with a three-generation processor jump, to reclaim its perch not as the world’s favourite music player – those days aren’t coming back, and nor is growth in the download market – but as the most powerful and flexible pocket computer you can buy.

Its siblings, the iPod Nano and iPod Shuffle, have also been updated, but only with new colours, not features. Since neither is compatible with Apple Music, there’s no new reason to doubt they’ll soon be ringing down the curtain and joining the choir invisible.

It might seem curious that the new iPod Touch wasn’t unveiled during the launch of Music, but this model was never about that. It’s not a clever iPod, it’s a dumb iPhone. 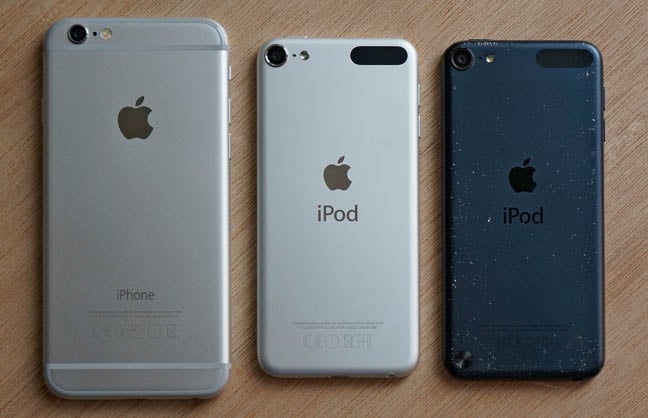 The iPhone 6 (left) may have room for a bigger screen, but the iPod Touch (6th gen centre, 5th gen right) is slimmer, lighter and neater.

Not so dumb now that it’s had probably the biggest technical upgrade of any Apple device ever. It still can’t make voice calls, but that’s what FaceTime’s for, grandad. More importantly in 2015, it can’t act as companion to an Apple Watch. Those niches aside, it’s now a full-blown iPhone at a third of the cost.

The entry point of £159 for a 6th-generation touch with 16GB of storage is significantly lower than the previous generation’s launch price of £249, but it isn’t actually a price cut: a version of the 5th gen was introduced a year ago at this level. That still had the A5 processor from the iPhone 4s, a chip already three years old. For the same money, you now get the A8 from the current iPhone 6. It’s the first time the iPod touch has caught up with iPhone hardware.

Well, almost caught up. Although it’s the same chip, it’s running at a slightly lower clock speed, according to Geekbench. That could be to preserve battery life: the Li-ion pack still has a capacity of only around 1040mAh, less than 60 per cent of the iPhone’s 1810mAh, yet Apple promises eight hours of continuous video playback; nearly 75 per cent of the iPhone’s 11 hours. 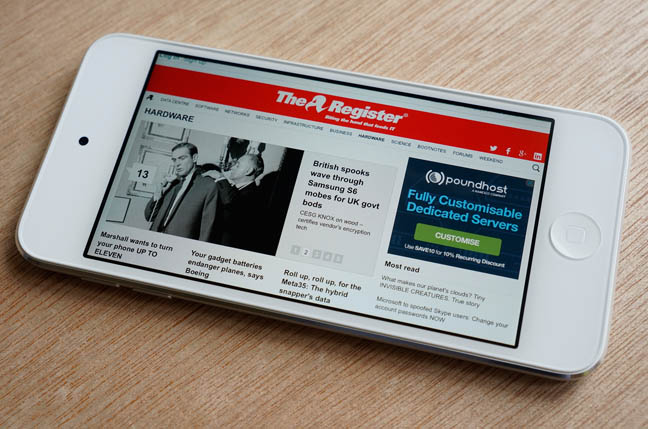 On the left are volume buttons like the iPhone’s, but no mute button. The Sleep switch is still on the top edge, and the headphone socket at the bottom, beside the decent but singular speaker

The smaller screen (at four inches, it matches the iPhone 5 and 5s, not 6) will help with that, though, and we know the more recent processors are more power-efficient. Heat could be a reason to limit speed: the new iPod touch does feel very, very warm running games with heavy GPU demands. Even the screen, not just the back panel, can get almost uncomfortably hot.