NASA: 'Closest thing yet to ANOTHER EARTH' - FOUND

World not unlike Valeria from the Lensman stories

Pics NASA boffins say they have found the closest thing yet to another Earth – Kepler-452b. Apparently the Valeria*-esque planet has heavy gravity, such that should humans ever colonise it they would become immensely strong.

"This is the closest thing we've yet found to another Earth," said Jon Jenkins, Kepler data analysis chief at NASA's Ames Research Center.

At a press conference on Thursday, NASA unveiled Kepler-452b, an alien world orbiting a star very similar to our Sun in the constellation Cygnus.

The planet is said to be perfectly placed in its solar system to be habitable.

Specifically, 452b lies in what's called the Goldilocks Zone, which is the distance a planet needs to be from its star for liquid water to exist on its surface. Water is, of course, an essential building block of life as we know it.

Kepler-452b is circling a G-type star, similar to our Sun but a little older and bigger. The star is about 10 per cent bigger than ours, and about 20 per cent brighter. Kepler-452b orbits every 385 days compared to our 365. 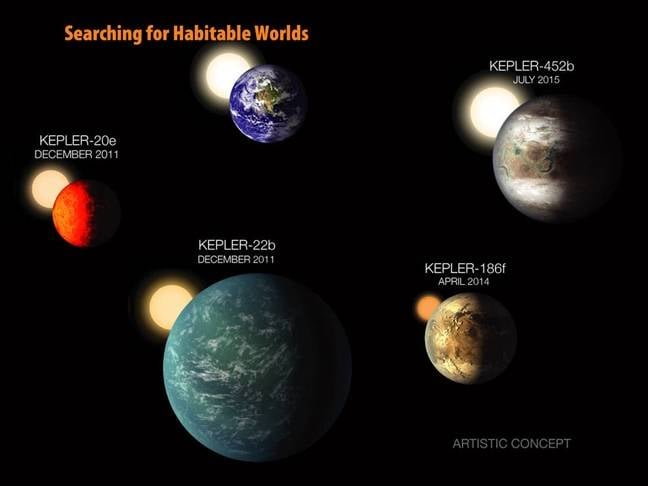 The many worlds found by exoplanet-hunting orbital Kepler telescope

The newly discovered planet is about five times larger than Earth, would have about twice the gravity, and NASA says there's a "better than even" chance that it's rocky like Earth. The atmosphere is thicker than ours and it's likely there is volcanic activity on the surface, NASA geologists estimated.

"If you travel to this star with an ark full of plants and animals we hope it would be rocky," said Jenkins. "But hopefully there would be a lot more raw materials to use and the sunshine is perfect for Earth plants; it would feel a lot like home."

Even more encouraging is the age of the planet. NASA estimates Kepler-452b is six billion years old – older than our home world by a couple of billion years. It's not beyond the realms of possibility that life could have evolved there, as it has here.

However, it's possible that life has already died out on Kepler-452b. Age is not always a good thing, and the climate may already be too harsh on the planet for life as we know it to survive.

Next page: Climate change in the galaxy
Page:
Tips and corrections
102 Comments