If only you could buy shares

The growth occurred between September and May this year, we'e told.

Angler emerged in 2013 to become one of the most capable exploit kits. Like its rivals, the code is designed to be an all-in-one ram-rod hacking package that web scum can use to get their malware, ransomware, and other net nasties past user machine defences.

The hacking toolkit incorporates emerging, patched and private zero day vulnerabilities and is cleaning up is dominating the market in the wake of the downfall of the BlackHole exploit kit which fell to pieces after the aptly-named founder Paunch was arrested in 2013.

"Angler has risen above its competitors in recent months," Howard says.

"This could be down to many factors: higher traffic to Angler-infected pages; exploits with a better hit-rate in delivering malware; slicker marketing amongst the criminal fraternity; more attractive pricing – in other words, good returns for the criminals who are buying 'pay-per-install' malware services from the team behind Angler.

"One thing is clear: Angler has a serious impact on anyone browsing the web today."

It has since kept in headlines by quickly incorporating the three Adobe Flash zero day flaws that emerged from the Hacking Team breach, a trend that it has maintained to ensure its commercial success. 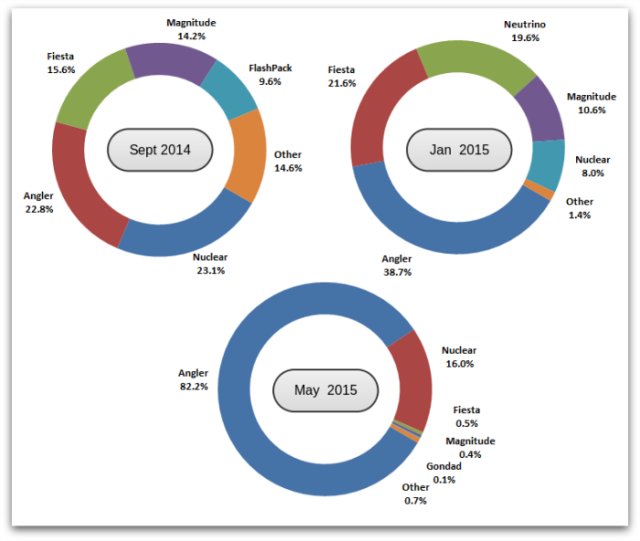