Google gives away 100 PETABYTES of storage to irritate AWS

Google has flicked the switch to take its “Nearline” archival cloud storage service live, and tossed in an offer of 100 petabytes of free storage to set the snowball rolling.

Nearline is Google's competitor for Amazon Web Service's Glacier. Unlike Glacier, which is thought to rely on Blu-Ray, Nearline uses disk and flash*. Google therefore makes much of its three-second restore times, as AWS says “Glacier is optimized for infrequently accessed data where a retrieval time of several hours is suitable.”

Both services offer prices from US$0.01 per gigabyte per month.

Now that Nearline is live, Google has to market it. And has chosen to do so in a typically deep-pocketed way by offering 100 petabytes of storage free for six months on the terms illustrated below.

If switching from another cloud provider sounds like a pain in the posterior, Google's got that covered too by allowing import over HTTP or HTTPS. AWS' S3' can make data available over HTTP/S, so all you have to worry about is lots of egress traffic costs rather than the hassle of downloading, uploading and so on.

There's also a new feature allowing bursting beyond Nearline's everyday 4 MB/s of read throughput per TB of data, plus partnerships with EMC, Commvault and Actifiio (among others) to use Nearline as just another target for backups. 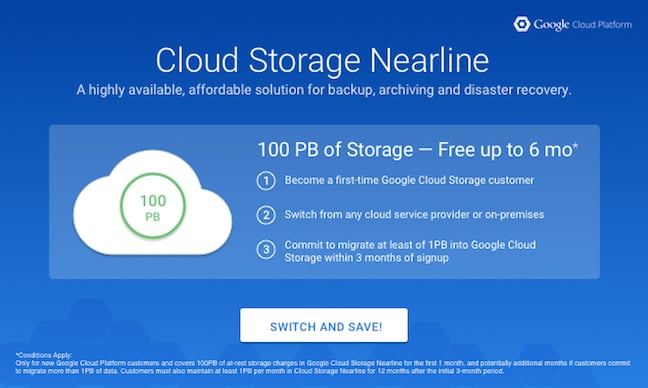 Microsoft's Azure doesn't have a service to match Glacier or Nearline, but Redmond's not the biggest loser here. That crown probably goes to tape vendors, who are as much the target of Google's big offer to new customers as AWS. Big tape users who've held out from making the jump to cloud now have six months to test Nearline at scale. With the likes of Quantum wobbling, IBM struggling to turn a quid with any form of storage, the last thing tape players need is Google giving away a competing product. ®

* As revealed to our sibling publication The Platform.