It would be easy to turn this piece into one long bug report, but that would miss the point that there is a lot to like in Windows 10 as a tablet operating system. The biggest difference is that improved built-in apps, combined with Office Mobile, mean that you can spend more of your time in a touch-friendly environment, whereas in Windows 8 is it never long before you end up stabbing at tiny buttons and menus in the traditional desktop.

Microsoft’s efforts to merge desktop and Metro have also delivered a taskbar that works well with touch. By default, the taskbar is always visible, showing the Start button (unnecessary if you have a hardware button), back arrow, Cortana/Search, task switcher, and essentials including battery status, Wi-Fi, notifications icon, volume and date/time. The taskbar takes up precious screen space, but having these statuses always on view is an advantage over Windows 8, where you needed to swipe from the right to get information on battery or time. It is also more accessible for new users. 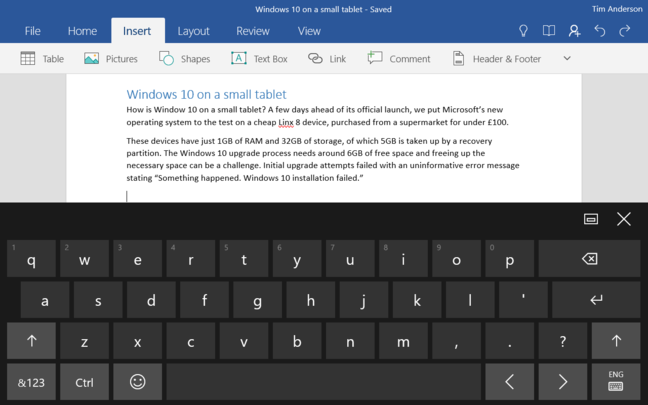 If you stay in tablet mode, the desktop is hidden from you, and unlike Windows 8 there is no Desktop tile to tap. You can still run desktop applications, which run in full screen mode. This can give odd results, such as with the old utility Character Map that occupies the top left corner of the screen, leaving most of the display blank, while for some reason also hiding the taskbar.

It runs though; treat that as a bonus. Applications like File Explorer, for which at least some effort has gone into making it touch-friendly, run nicely in tablet mode and without the jarring transition you get in Windows 8 when moving from Metro to desktop.

An oddity is that in tablet mode, the taskbar hides the icon for the touch keyboard by default. Windows 10 is much better than Windows 8 at popping this up automatically when an edit field is active, even in a desktop app. It is not perfect though, and when I fired up the command prompt I found myself staring at the blinking cursor with no means of entering text. What you have to do is to press and hold the taskbar, and select Show touch keyboard button from the pop-up menu.

If you yearn for the full-screen “immersive UI” from Windows 8 you can more or less recover it by putting the taskbar into auto-hide mode, when it appears only if you swipe up. This setting though is only visible in desktop mode.

Cortana works, complete with voice input, but only if you switch language to US English. You can use Cortana to start apps, by tapping the Listen icon and saying something like “Open calculator”. You can also have Cortana respond to “Hey Cortana” for complete voice control, but this is not recommended since it burns battery life on idle (and Windows power management is poor enough as it is).

Performance is good, and I did not notice any slow-down compared to Windows 8 on the same device. The caveat is that with 1GB of RAM the device seems to struggle if too many apps are open. There seems to be a defect here, too. I tried to open Mail and it immediately quit. I then opened the task switcher, closed several apps, tried Mail again and it worked. But Windows is meant to do this automatically, at least with Store apps, closing them in the background as required. By way of mitigation, they rarely lose data.

The Linx includes a micro HDMI port as well as Intel WiDi (Wireless Display), which lets you project your screen to another display. Both worked well with Windows 10. I connected a full-size monitor and was able to set it up for dual display. Wireless connection also proved useful, for example when showing snaps stored on OneDrive on a big screen in the living room.

Microsoft has chosen to restrict the Office Mobile apps according to display size, so that “core editing” is free on devices with 10.1” screens or less. The Linx 8 qualifies, and I was intrigued to note that editing in Word Mobile still worked when it was attached to a large display. 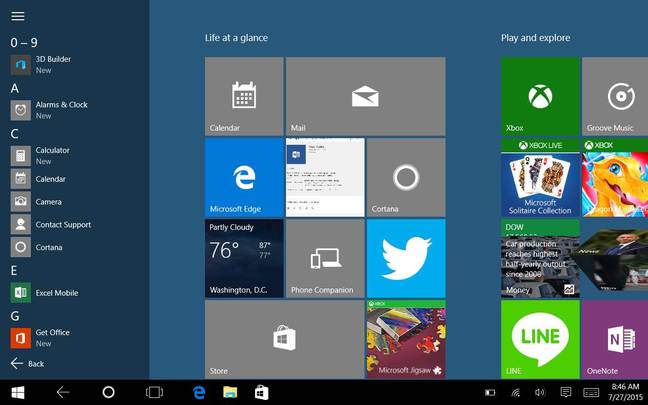 The All Apps menu in Windows 10

The Start menu in Windows 10 is a different application from that in Windows 8, though it still supports Live Tiles. In Windows 8, if you want to start an app that is not pinned to the Start screen, you either swipe from the right and type to search, or swipe up to reveal the All Apps view.

In Windows 10, the equivalent options are to type into Cortana/Search, or to tap the bottom left icon to show the All Apps menu, a narrow hierarchal menu that is more logical but also more fiddly to use than in Windows 8. The solution is to pin all the apps you use with any frequency to the tile menu.

Next page: Much improved over Windows 8
Page: