Wi-Fi 'reflector' hooks you up at 0.1 per cent of current power budget

NASA boffins get the transceiver out of the smartwatch

By using absorption and reflection to indicate data states, NASA reckons it's created a Wi-Fi device for the wearable market that uses just 0.1 per cent of the power of ordinary transceivers.

Working with Frank Chang at Caltech UCLA, the JPL boffin Adrian Tang is keen on ways to let devices with relatively low communications needs do without recharging.

As NASA explains here, their idea is to let a chip either reflect a signal back to a base station or access point (representing a binary 1), or absorb it (representing a binary 0). That way, the Wi-Fi device (be it a smart-watch or a a bio-sensor, for example), only needs enough energy for its own operations, instead of having to carry power for a full transceiver.

Not only that, but the device is fast. The NASA release says that at a short 2.5 metre distance, it can communicate at up to 330 Mbps, “using about a thousand times less power than a regular Wi-Fi link”.

The secret sauce is for the chip to discriminate between the signal it's supposed to either reflect or absorb – the one emanating from the base station or access point – and signals that have been reflected from the walls of a building. Tang and Chang's device can identify and suppress this background noise. 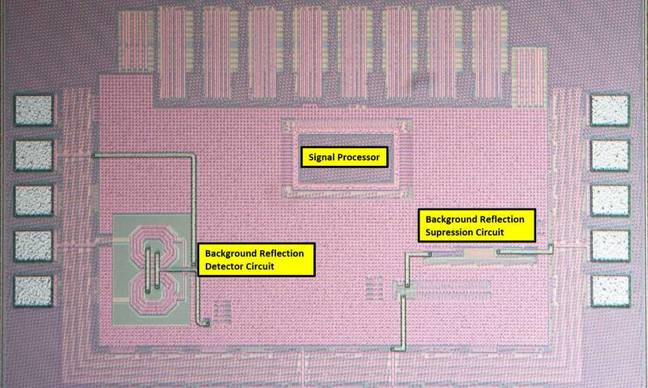 The base station or router will consume more power – NASA doesn't say how much – since in the current scheme, it transmits a constant signal to the far-end device. However, the pair of researchers are working on getting around that requirement.

NASA and UCLA say Caltech, which manages the patents, has already secured agreements to commercialise the device. ®