Next year, the world will start using products with an amazing new type of memory in them - or so say Intel and Micron, allied to produce the 3D XPoint chippery.

This is, we're told, a radical resistive-RAM technology that is bit-addressable, non-volatile, and forms a new memory tier between DRAM and NAND. That means software can access it far more easily and quickly than block-based flash – and the chips keep hold their data even when switched off, just like a hard drive.

It is closer to DRAM in its speed, being 1,000 times faster than flash, and has up to 1,000 times flash's endurance, or so we're told. It will be used as a drop-in replacement for solid-state drives and NVMe (Non-Volatile Memory Express) PCIe cards, needing no change in the host software.

On the other hand, Intel and Micron reckon the 3D XPoint chips will prompt the development of new compute and storage architectures, which may well need software changes.

It's called 3D XPoint memory because it has two layers – that's the 3D angle – and crosspoint because the 1-bit cells are located at the intersections of word lines and bit lines, meaning the cells can be addressed individually. We're told "data can be written and read in small sizes, leading to faster and more efficient read/write processes."

There is a crosspoint array structure with perpendicular conductors connecting the 128 billion 1-bit memory cells in the 2-layer die.

There are no transistors involved and it is not electron-based storage. The cell material has its resistance changed between two levels by an undisclosed process, and this provides the binary value of a cell. All the material in the cell is used for this but we're not told what the material is. 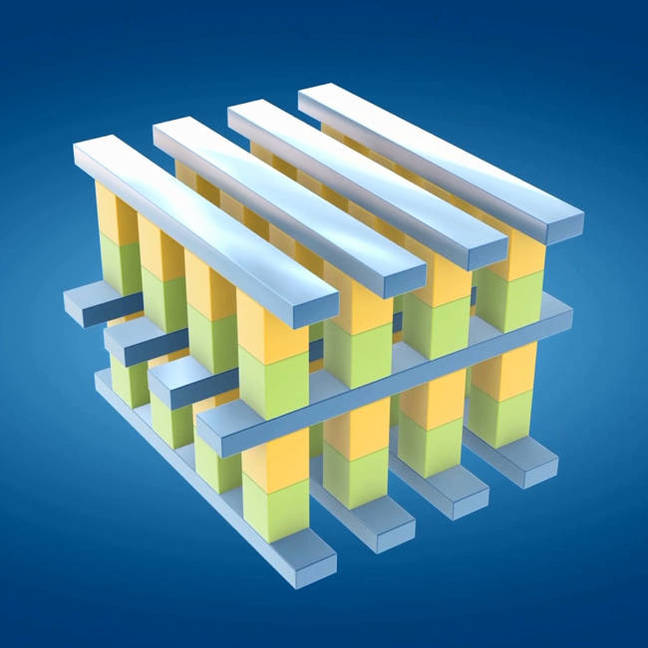 Memory cells are accessed and written or read by varying the amount of voltage sent to a selector. This eliminates the need for transistors, we're told, increasing capacity while reducing cost.

An Intel spokesperson categorically denied that it was a phase-change memory process or a memristor technology. Spin-transfer torque was also dismissed. Whatever it is, Intel and Micron have been developing it for about ten years, and together as a joint venture since 2012.

They envisage that more layers could be added in future. Also the cell geometry can be scaled down, meaning capacity can be increased in two ways.

What a new class of memory means for future applications

Nicole Hemsoth
It is not an insignificant thing to announce an entirely new class of memory. After all, in the almost 60 years that memory has been manufactured, there have only been seven types that have emerged—all of which had different attributes that were improved upon in successive generations...
For full in-depth analysis, read

An XPoint memory chip will store 128Gbits (16GB), meaning a 3D XPoint SSD will have the same capacity range as a current SSD using 128Gbit NAND chips that are 1 bit/cell, SLC, or single level cell NAND.

Next page: Impact on the computer industry
Page: