Windows 10 could be better. OneDrive integration is a problem. Windows 8 introduced an elegant system called placeholders, showing the entire contents of your OneDrive in Explorer but only downloading files on demand. Microsoft decided it was confusing and did not always play well with applications, so now you have to select which folders you want to sync, and others are invisible. In mitigation, apps like Office Mobile and Photos can still see what is in OneDrive, even if they are not synced locally. Combine this with confusion over OneDrive for Business – Office 365 storage – and the poor OneDrive for Business client (a new one is in preparation), and you have one feature in Windows 10 that is not yet ready. 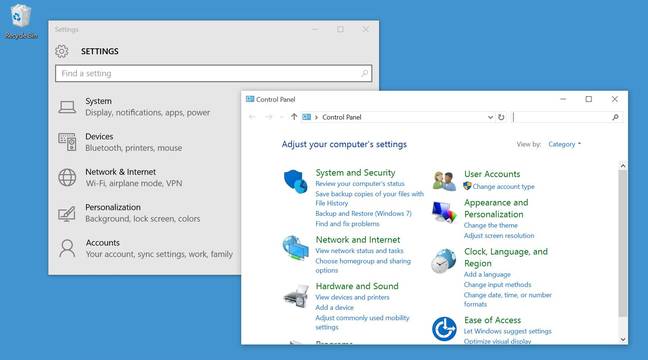 Which settings? Inconsistency of design in Windows 10

Another annoyance is inconsistency of design. Some parts of Windows are in the modern style, like the new Settings app, others are in desktop style, and even within the desktop there is plenty of variation, with some ribbon menus, some text menus, and some dialogs that look hardly touched since Windows 3.1 days. Where to find settings is another issue. Search for Touchpad in Settings and you can set a click delay, but most touchpad settings are in the old control panel. On this laptop there is a Synaptics settings app complete with illustrations from Windows 7.

Windows 10 lets you log in with Azure Active Directory, as used in Office 365, but you still need a Microsoft account for some features, so progress here is incomplete.

What about stability? Windows 10 has made remarkable progress. Build 10240 appears to be the release build, but patches since its release a fortnight ago have fixed a number of issues. On a modern PC like the Spectre x360 it now seems in good shape, though I noticed some minor anomalies. In general you can expect more problems with UWP apps than with desktop applications.

The in-place upgrade to which Microsoft is steering millions of users is risky. The upgrade is designed to offer a way back if it goes wrong, but wise users will also take their own backup before proceeding.

The last chance for Windows?

Windows will trundle on forever as a legacy operating system, running countless existing business applications, but it cannot progress to become an attractive target for app developers unless Microsoft can persuade users that it is time to move on from Windows 7. Windows 8 failed in that task, and Windows 10 is perhaps Microsoft's last chance to pull its operating system from the legacy hole it is in.

This release has been rushed, and there will be anguish in the coming weeks over bugs and failed upgrades, but Microsoft has made great strides in the days leading up to release and its quality now looks reasonable.

Although they are optional, this release does push users strongly towards a Microsoft account, OneDrive, and Office 365, and Cortana will not appeal to the privacy-conscious. It is also important to understand the implications of Windows as a service – if continuous incremental upgrades do not appeal, stay away. Note too that neither the new Start menu nor the revamped taskbar are unequivocally better than their Windows 7 equivalents. There are compromises involved in creating a hybrid operating system.

Despite the compromises, this operating system is more coherent than Windows 8, more familiar to Windows 7 users, and you can point to solid reasons for upgrading. Examples would be DirectX 12 and Xbox Live Streaming for gamers, Office Mobile and multiple desktops for productivity, Azure AD log-in for Office 365 users (it is not done yet but it is progress), and high-quality built-in apps for consumers.

Immediate upgrade is for the brave, but Windows 10 is a worthwhile release for both business and consumers. ®