Here is some Christmas holiday reading. HP's claim that RRAM, PCM, and MRAM are all memristor technologies is bullshit, the memristor is not a fourth fundamental circuit element, HP didn't find it, and its developing memristor product is a not a memristor - really.

The flame from Blaise

So says ex-USPTO patent examiner and inventor Blaise Mouttet1 of Arlington, Virginia. He commented to me on a story about HP and Hynix producing the memristor goods by 2013, saying: "You are either an idiot or trying to get in good with HP for contributing to their bullshit claiming that RRAM, PCM, and MRAM are all memristor technologies. Aren't you capable of distinguishing between corporate propaganda and legitimate technological development? What a disgrace."

Upon asking why he thought that he replied:

The original 1971 definition of a memristor given by Chua was a 2-terminal non-linear passive circuit linking electric charge and magnetic flux linkage. None of the memory types you listed in your article have been shown to conform to this definition and it is irresponsible to claim them as memristors unless this is shown.

The "memristor" is a propaganda campaign by HP to take credit for emerging memory devices invented by other companies. Chua's memristor theory does nothing to explain the actual physics in any of these devices. I gave a presentation at ISCAS 2010 which expands on some of these points ... as well as an online article attempting to explain why the memristor model is wrong and providing some background historical context. It is very disappointing to me that so many in the scientific press so easily buy into this memristor crap without attempting to look more closely into the motivations behind why HP is promoting it so much or whether their claims stand up to scrutiny.

To understand his points we have to delve into a little electronics and a little history.

First we have to note that a classic resistor in electronics is a linear circuit element whose resistance to electric current depends upon a proportional relationship between current and voltage as represented by Ohm's law; i=v/r.

Some special electronic devices have a resistance that depends upon the history of a previously applied current or voltage. Bernard Widrow of Stanford University devised the term 'memistor' in 1960 for this, while working with electro-chemical resistors in an attempt to build a artificial neuron-like circuit called ADALINE (ADAptive LInear NEuron). Various scientific papers discussed solid-state, thin-film memistors after that3.

Mouttet says that Leon Chua, a a UC Berkeley professor of non-linear circuit theory, coined the term "memristor" in 1971 to describe what he considered to be a missing circuit and the “4th fundamental circuit element” after the resistor, capacitor, and inductor. This 4th circuit element claim is fallacious in Mouttet's view.

[Chua's original memristor definition did not] postulate any mechanism at all. Moreover, the memristor definition did not even require causality. In other words, the mathematical relationship between flux and charge could be the result of some other cause – any mechanism that led to the constraint embodied by the equation dφ = M dq would lead to a device with the properties of a memristor.

He published these initial findings4 essentially as a curiosity – it was not obvious at that time that such a circuit element existed. However, some people (as I did at first) have taken this paper too literally and thought that a memristor must involve a direct interaction of a charge with a magnetic flux – in fact, there was no such requirement or restriction in the memristor definition.

A documented brief history of memristor development by Williams can be downloaded here (pdf). It is a very good read.

Is it a fourth fundamental circuit element?

Williams says this is a judgement call. His memristor history docent discusses the notion and includes this diagram: 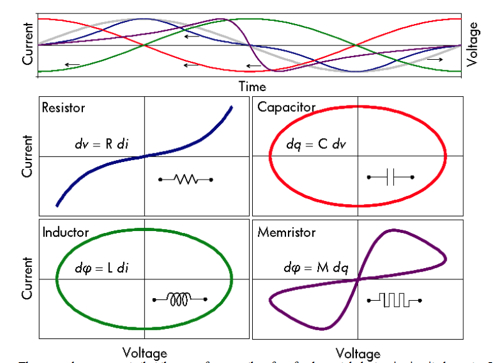 Current-voltage characteristics for the resistor, capacitor, inductor and memristor.

Williams says: "The upper panel shows an applied voltage sine wave (gray) versus time with the corresponding current for a resistor (blue), capacitor (red), inductor (green) and memristor (purple). The lower figures show the current-voltage characteristics for the four devices, with the characteristic pinched hysteresis loop of the memristor in the bottom right. It is nearly obvious by inspection that the memristor curve cannot be constructed by combining the others."

Chua's memristor ideas developed, Mouttet claims, into a more generalised theoretical framework in 1976, in the form of memristive systems. These were shown to be applicable to the modeling of biological neurons.

An article by Mouttet says: "The recent interest in the memristor theory of Chua was sparked by an article in the journal Nature published by researchers at HP Labs in 2008 reporting memristive effects in TiO2. (Titanium Dioxide)," called "The missing memristor found."

According to Mouttet, the HP researchers tried to show that memristor theory could be used to model resistive switching effects that occur in several thin-film materials:

A memristive systems model may be mathematically formulated as:

Mouttet says the models developed by HP have problems, such as not taking memcapacitive effects into account, being poorly formulated for electrical engineering applications, not distinguishing between internal and external electric fields. He claims HP's newer models do not actually represent memristors at all5.

... the models used by HP in describing Pt-TiO-Pt have diverged from the original Nature paper and no longer describe a memristor but rather the more general class of memristive systems in which dx/dt exhibits an exponential rather than linear relationship with current. As far as I can tell there is STILL no solid state material which can legitimately be called a 2-terminal memristor as originally defined in Leon Chua’s 1971 paper.

Mouttet is quite wrong. There is no HP propaganda campaign to take credit for the memristor. HP Is not trying to impose an HP brand on the memristor idea.

Mouttet says Chua altered his definition of memristors to include "All 2-terminal non-volatile memory devices based on resistance switching," in a 2011 paper6. This meant his original memristor concept, HP's memristor devices and other technologies such as RRAM, PCM, and MRAM can all be called memristor-type technologies.

But previously, in his 1976 paper7, he had excluded such devices from being memristors, writing “...there remains an even broader class of physical devices and systems whose characteristics resemble those of the memristor and yet cannot be realistically modeled by this element...”

In Mouttet's judgment, "it appears that Chua has recently broadened the definition to save face for HP which has found that their device is not a memristor according to the original definition."

Not so says HP, not so at all

Williams agrees Chua broadened his definition but this had nothing to do with saving HP's face, nothing at all.

This issue was made much clearer in a second paper8 published with his then student Sung Mo Kang ... a critical generalization of the simple memristor concept of the first paper.

Chua and Kang introduced the fact that a 'memristive device' has a state variable (or variables), indicated by w, that describes the physical properties of the device at any time. A memristive system is characterized by two equations, the 'quasi-static' conduction equation that relates the voltage across the device to the current through it at any particular time, v = R(w,i) i, and the dynamical equation, which explicitly asserts that the state variable w is a time varying function f of itself and possibly the current through the device, dw/dt = f(w,i).

Neither the flux φ nor the charge q appears in either of these two equations, but it is relatively 'easy to show' that if both R and f are independent of the current i, the two equations reduce to the original definition of a memristor.

Williams then notes that Chua and Kang introduce a key new idea:

Furthermore, the quasi-static conduction equation places a requirement on the current-voltage characteristic of the device – if a memristive system is driven with some type of cyclic excitation, such as a sinusoidal current, the plot of the voltage vs. the current will be a Lissajous curve for which the voltage is always equal to zero when the current is zero, and vice versa.

Chua called this curve a 'pinched hysteresis loop', and it has an important physical interpretation – neither a memristor nor a memristive system stores either charge or energy (like a capacitor, for example), but they do 'remember' their history because of their changing resistance.

This generalised memristor idea was independent of any physical mechanism at the time. In Williams' view: "The key result was that any electronic circuit element that displayed a pinched hysteresis loop in its current-voltage characteristic could be described mathematically by the two memristive system equations."

This led on the generalised memristor idea:

As more researchers began to cite the original works, it became clear to most that the distinctions between 'memristors' and 'memristive systems' were unimportant, so Chua has recommended that the nomenclature be simplified by referring to both as memristors.

What is a memristor?

According to the general mathematical model, a memristor is any passive electronic circuit element that displays a pinched hysteresis loop in its i-v characteristic, independent of what the physical mechanism is that causes the hysteresis.

The 2-terminal passive electronic circuit restriction has gone away.

Mouttet is quite wrong. There is no HP propaganda campaign to take credit for the memristor. HP Is not trying to impose an HP brand on the memristor idea: "We have chosen to use the term memristor to describe the devices in our papers, not because we are trying to impose an 'HP brand' (especially since the term was invented by Leon Chua), but because we feel the general term connotes a broader range of applications."

Also the memristor was a distinct discovery:

It is a rigorous mathematical model that can be used to predict the behavior of a wide variety of physical devices. There have been many developments of different types of memristors, now called by many different names, based on different materials and physical mechanisms, but they are all described by the same general mathematical formalism developed by Chua.

To get deeper into these matters read Williams' short history of memristor development, and make your own mind up whether HP has discovered the Fourth Element or not.

Compliments of the season to you all. ®

Notes 1. Blaise Mouttet assisted in the formation of the patent class for nanotechnology used by the US Patent and Trademark Office. He maintains a blog devoted to reviewing newly issued U.S. patents in nanotechnology and is an inventor in 11 US patents related to memristive electronics applied to signal processing and adaptive control. He has given presentations related to memristive devices at the 1st Memristor and Memristive Systems Symposium held at UC Berkeley in 2008 and at the IEEE International Symposium on Circuits and Systems (ISCAS) held in Paris, France in 2010.