Boffins get the inside dope, craft white laser

If this works, your light bulbs will deliver hundreds of gigabits per second

Arizona State University researchers have crafted a white laser – a neat trick since “white” isn't a colour, but a mix of colours.

To create a white LED lamp, for example, today's technologies need multiple colour LEDs blended together. Trying to fabricate a single light source that looks white is difficult, however, since that means growing different semiconductor crystals at chip-level proximity to each other.

As the IEEE's Spectrum explains, that usually results in fatal defects in the semiconductors.

The wavelength a semiconductor emits depends on its atomic structure and bandgap, the university's release says. 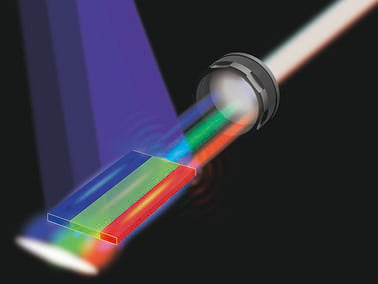 All in the mix: schematic of Arizona U's "white" laser

“The key obstacle is an issue called lattice mismatch, or the lattice constant being too different for the various materials required,” said PhD student Zhicheng Liu. “We have not been able to grow different semiconductor crystals together in high enough quality, using traditional techniques, if their lattice constants are too different.”

Regions rich with selenium and cadmium give off red light when excited by a light pulse; green comes from regions rich in cadmium and sulphur, while zinc and sulphur regions glow blue.

By adjusting the mix, the boffins say they have a laser that is completely tunable across the visible spectrum.

Lasers are an attractive light source, since they're even more efficacious than LEDs, and the university also notes that a white laser lighting system can also be modulated for so-called “Li-Fi” communications.

The multiple wavelengths involved in a white laser give it an advantage over current Li-Fi offerings, with the university saying it could be at least 10 times as fast. Li-Fi's already been clocked at 10 Gbps, and over 200 Gbps in the lab.

The research is published in Nature Nanotechnology (abstract). ®