Pics Facebook's bonkers dream of beaming internet access to remote corners of the globe has taken yet another step – or perhaps that should be flight – closer to reality with its new flying laser drone.

Engineers working for the free content ad network unveiled a massive Aquila autonomous drone, which is fitted with a laser communication system capable of shifting up to 10Gbps of data.

Mark Zuckerberg has been banging on about internet drones for what feels like ages now; what's new here is that a full-size Aquila aircraft has been built and now awaiting testing, and that the team's laser comms have hit a 10Gbit-per-second transfer rate.

Aquila is a carbon-fiber flying wing that's 42 metres across with four solar-powered propeller engines – that means it's wider than a Boeing 737's wingspan. It's designed to fly at between 60,000 and 90,000 feet, well above commercial airline traffic, and stay in the air continuously for three months at a time.

The plan is for a fleet of Aquila drones to circle a fixed ground station autonomously and blanket the area below with wireless internet access. The drones act as a relay, sending network packets wirelessly to and from the homes below and the ground station, which is hooked up to the internet. The flying machines also communicate with each other to maintain coverage.

All the drone-to-drone and drone-to-station communications will be carried out by lasers beams, which carry encoded data. 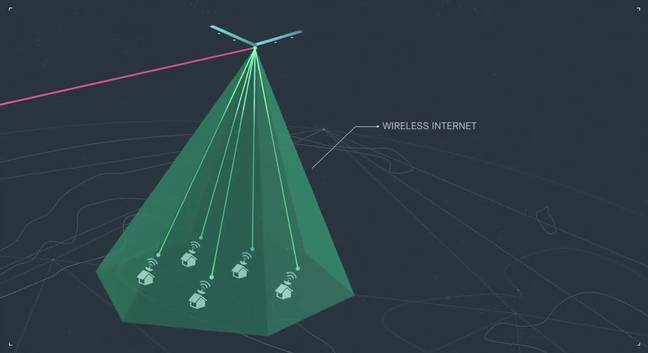 Distributing the web ... each drone acts as a relay between remote homes and a central station that's connected to the internet

The laser system Facebook has showed off is capable of 10Gbps transfer rates, and the tracking system is so accurate it can stay focused on a dime from a distance of ten or more miles away, we're told. This will enable the drones to pass information back and forth between them and also to ground stations.

"Our goal is to accelerate the development of a new set of technologies that can drastically change the economics of deploying internet infrastructure," said Jay Parikh, Facebook's global engineering and infrastructure veep.

"Our intention is not to build networks and then operate them ourselves, but rather to quickly advance the state of these technologies to the point that they become viable solutions for operators and other partners to deploy." 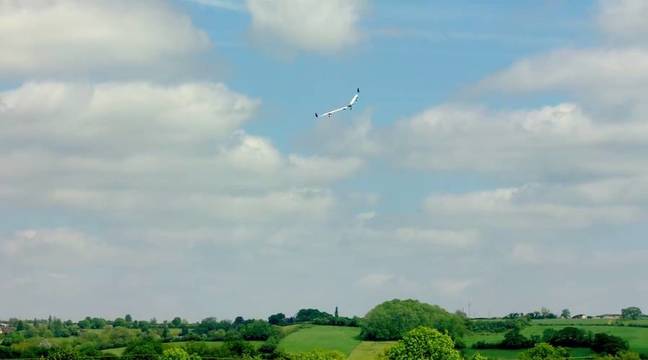 Aye, in the sky ... Facebook's prototype drone during a test

Because American legislators haven't caught up with the need for drone flights yet, the Aquila drone will be tested in the UK and is expected to take off later this year, and undergo around six months of flight time to iron out the wrinkles.

All of this effort is part of Zuckerberg's desire to get everyone on the planet online as soon as possible. Expect Amazon jungle selfies and posts from angry Inuit complaining about having to eat seal liver on your Facebook feeds. ®