When the Philae lander failed to touch down cleanly on Comet 67P/Churyumov­-Gerasimenko, the mission looked like a mess. But the probe's four bounces across the comet's surface turn out to have been a blessing in disguise because they've given us more close-ups of 67P than expected.

The results have now appeared in a special issue of Science containing no less than nine papers about the comet.

At the first touchdown site, known as Agilkia, it has been revealed that:

The finds listed above has excited boffins because the compounds are understood to be “prebiotics” that made it possible for key ingredients of life to form.

The ESA has made a colossal .GIF of the Agilkia region, and of Philae descending towards it. At 7.6MB it's against Reg policy to include it in a story, but you can see it over at the space agency's site by clicking here.

At the so-called Abydos spot where Philae came to rest the probe was able to use the higher-resolution Comet Infrared and Visible Analyser (CIVA) camera array and the MUPUS thermal mapper and penetrator. Having pored over the results, boffins concluded the following about Abydos:

CONSERT also let Philae boffins figure out where the stricken lander ended up, as illustrated below. 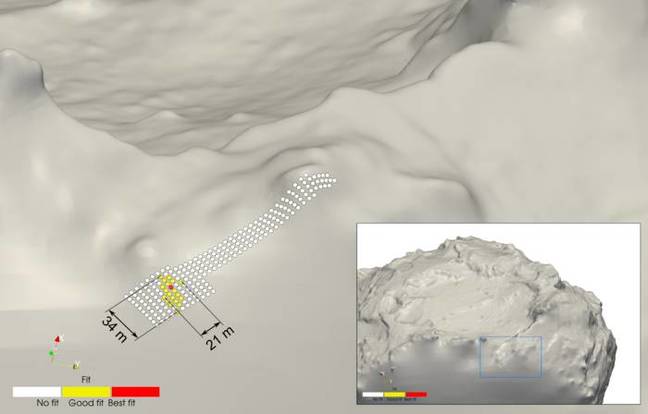 The European Space Agency hopes that humanity hasn't heard the last of Philae as we've just about literally only scratched the surface of the worldlet on which it rests. ®