Odd asteroid won't come this near again for 40 years 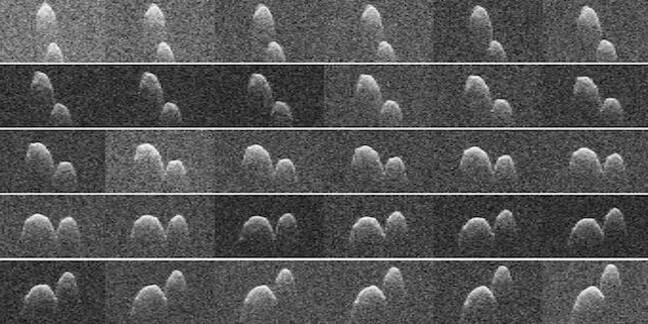 1999 JD6 – the boffinry name for the asteroid – made its closest approach to our world late Pacific Daylight Time on 24 July, the US space agency said.

It flew past Earth at a distance of around 4.5 million miles (7.2 million kilometres), which is roughly 19 times the distance from the Blue Planet to the moon.

The asteroid's nutty shape showing what appeared to be two lobes stuck together is somewhat unusual, NASA explained.

"Radar imaging has shown that about 15 per cent of near-Earth asteroids larger than 600 feet (about 180 metres), including 1999 JD6, have this sort of lobed, peanut shape," said NASA Jet Propulsion Lab boffin Lance Benner.

However, the dark Space Peanut – understood to be around 1.2 miles (2 kilometres) long and which rotates in just over seven-and-a-half hours – will not come that close to our globe for another 40 years. A flyby at a similar distance is approximately expected in 2054, NASA said.

The asteroid was first spotted in 1999, which accounts for at least part of its name. Vulture Weekend could not confirm at time of writing if six JDs had been downed in celebration (or indeed NEO horror) of the find, however. ®

Apophis will be inside satellite belt, visible to the naked eye from our home world, sweet release not imminent...