Windows 10 has rocketed to account for 0.375 per cent of the world's PC-driven web traffic, according to ratings firms Netmarketshare and Statcounter.

For those of you domiciled beneath stones, Microsoft released Windows 10 on July 29th, meaning it had a chance to make a mark on the month-by-month desktop OS market share data we collate each month.

Netmarketshare had Windows 10 coming in as the source of 0.39 per cent of the traffic it sees hitting web servers. StatCounter had it at 0.36 per cent, for our averaged headline figure of 0.375 per cent.

Microsoft, for what it is worth, has said that activated 14 million Windows 10 devices in the 24 hours after launch. Another reportclaims a Microsoftie says that number rose to 67 million by July 31st.

We've also glanced at the mobile OS market to see if Windows 10 has made an impact there in its early days. Sadly we're not in a position to say either way, as neither ratings firm added Windows 10 to their July reports. It's not been disclosed if this was because there was no traffic of note to record, or because they couldn't be bothered. 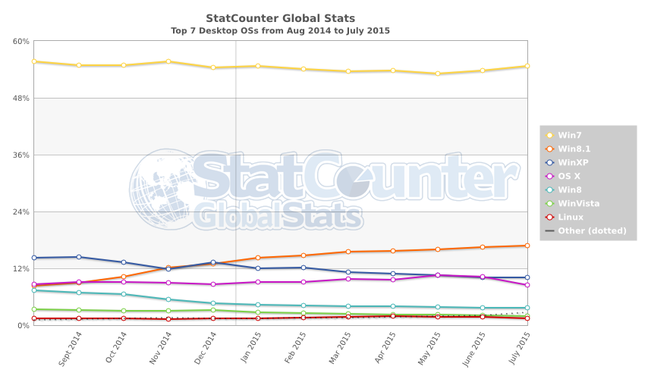 Netmarketshare has Windows 8 dipping below the three per cent mark, to 2.77 per cent, and StatCounter has Windows Vista settling on exactly two per cent.

August's data promises to be interesting, as Windows 10 will have reached a lot more machines by the time this month ends. If Microsoft has its way, it will just about kill off Windows 8 and 8.1 within weeks. We'll be back in early September to see if things are running Redmond's way. &Reg;