VMAX flashes its virtues for all to see

You wait for a bus forever, then two come along at once. So it is with EMC and SPC benchmarks, and all of a sudden we have both SPC-1 VNX8000 and SPC-2 VMAX 400K.

The Storage Performance Council lists industry-standard random block IO performance (SPC-1) and streaming storage performance benchmark results (SPC-2). Each one provides a numerical performance score in terms of IOPS (SPC-1) or MB/sec (SPC-2), and a price/performance score based on the product's list price. So we have an objective way of comparing different vendors' storage array products' performances.

As many vendors don't allow customers to release performance information, through end-user license agreement (EULA) restrictions these SPC benchmarks, although synthetic, are the best comparative performance measures we have.

The VNX8000 was introduced in September 2013, and came with a SPECsfs2008 benchmark, which showed it had good NFS file access performance. 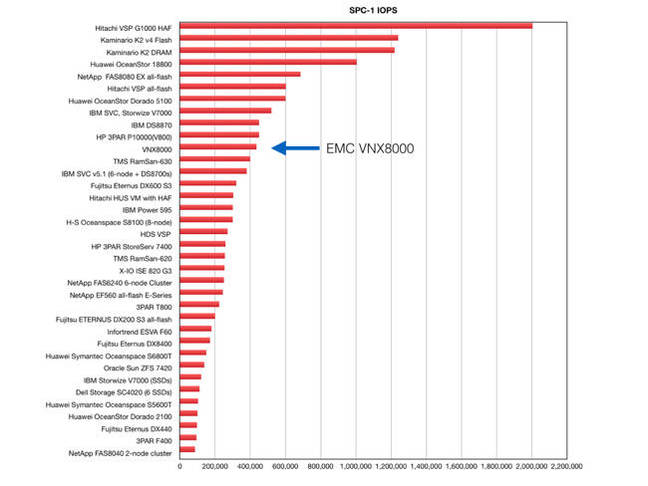 This block IO result is a solid mid-range one, with the VNX8000 beating several systems and losing out to others. Some of the systems in this chart are quite old. For example, HP's 3PAR P1000 result is dated October 2011. The SVC Storwize V7000 is from January 2012. 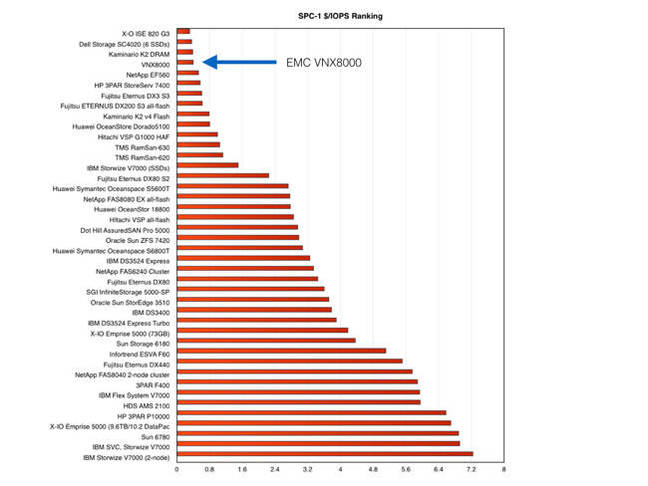 The VNX8000 used a hybrid flash/disk configuration, mostly flash though, with 40 x 100GB SSDs and 4 x 300GB 15,000rpm 2.5-inch drives. There were four enclosures, three with 10 SSDs only, SAS links inside the system, and 8Gbit/s Fibre Channel to the accessing hosts.

On streaming IO, the top-end VMAX 400K system does spectacularly well in an all-flash configuration, with SPC-2 [PDF]. 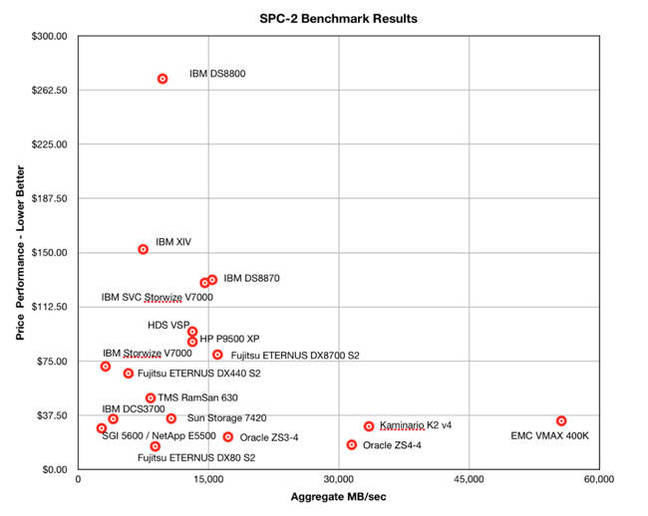 The Register's collected SPC-2 results in scatter diagram form. The VMAX 400K is in pole position, in the bottom right corner.

EMC's Jeff Boudreau, SVP and GM of the enterprise and mid-range systems d ivision, writes in a Pulse blog: "On a level playing field, we're showing that EMC knows how to compete on both value and performance. The midrange leading SPC-1 IOPS and record setting SPC-2 bandwidth performance demonstrate the design of each of these products for scalable hybrid flash performance at exceptional TCO, and help simplify customer choices in a loud and crowded storage market." ®