Revealed: The software sifting through the world's communications

In November 1987, San Francisco's Center for Investigative Reporting asked me over to show the Zircon program. My trip led to probably the most important surveillance story I have uncovered. I went to Sunnyvale to meet Margaret Newsham, a former Lockheed employee, and to hear about unconstitutional NSA activity.

I drove south on California Route 101. In Sunnyvale, close to where Google’s campus now stands, the highway ran past a huge windowless "Blue Cube" that controlled the NSA's constellation of surveillance satellites, run by Lockheed (it closed in 2010).

We sat on Newsham’s porch. She was a computer system manager who had worked for NSA contractor Lockheed for seven years before being forced out after challenging corruption. She had been assigned to Menwith Hill in 1978 to manage NSA databases, including something known as Project ECHELON.

Newsham explained that ECHELON was an automated computer driven system for sifting and sorting all types of international civilian communications intercepted from satellites, which were mainly operated by US companies.

The scale of the operation she described took my breath away (this was 1988, remember). The NSA and its partners had arranged for everything we communicated to be grabbed and potentially analyzed. ECHELON was at the heart of a massive, billion-dollar expansion of global electronic surveillance for the 21st century, she explained.

She feared the scale of automated surveillance:

"Its immensity almost defies comprehension. It is important for the truth to come out. I don't believe we should put up with being controlled by Big Brother."

While sitting inside Building 36D at Menwith Hill Station, Newsham had been invited to listen live on headphones to a call from inside the US Senate. She recognized the voice of Republican Senator Strom Thurmond, and immediately realized the NSA had gone off track.

"Constitutional laws had been broken," she told me.

She explained how she had provided evidence to the House Permanent Select Committee on Intelligence. Investigators told her they had issued subpoenas, and had asked to see plans for ECHELON. But nothing had happened.

She handed me some of the plans for ECHELON. In technical jargon, one described a basic toolkit for surveillance: the "commonality of automated data processing equipment (ADPE) in the ECHELON system.” Others described the ECHELON "Dictionary" database, the heart of the system holding groups of keywords that, when detected in communications, would be flagged up to analysts.

"Dictionary" ran on networks of mini-computers. Newsham had managed these networks. Some plans listed equipment she had helped deploy for a secret project covernamed "CARBOY II." She did not know where CARBOY was. 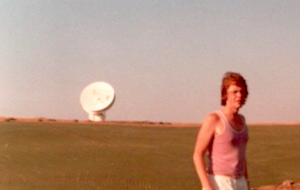 On location ... Campbell outside the Bude station in 1977

The plans showed how ECHELON, also called Project P415, intercepted satellite connections, sorting phone calls, telex, telegraph and computer signals. Although the internet was then in early infancy, what was carried digitally was covered. The way ECHELON had been designed, she said, the targeting of US political figures was not an accident.

Back in Britain, I matched Newsham’s plans to other clues. Pictures of GCHQ's base at Bude in southwest England showed two satellite tracking dishes, pointing directly at Western satellites called Intelsat. Intelsat, the first commercial communications satellite (COMSAT) network, linked people and businesses around the globe; for example, it even relayed the moon landings live. It started in 1965. From planning records and a press report, I deduced that GCHQ had planned to intercept Intelsat from Bude, beginning in 1966.

Bamford provided me with letters from 1969 between the NSA and GCHQ that he'd obtained, showing that the Americans had helped GCHQ bully the British into building the Bude station. A new GCHQ source told me that the NSA paid for the station under a secret agreement — and that the job was given to the Brits because of fears about US communications privacy laws.

I figured that a second ECHELON site would be needed to complete global coverage, intercepting a third Intelsat satellite over the Pacific Ocean. Bamford and I both found the site — built in America, spying on US communications with Asia. In November 1970, a Washington state newspaper revealed the US Department of Defense's plans for a so-called “research station” in Yakima, about 150 miles from Seattle. I obtained photographs. They showed it was targeting the Pacific Intelsat. At the dawn of the era of mass surveillance, almost 50 years ago, the ECHELON stations at Bude and Yakima were the global mass-surveillance system.

I had also seen confidential papers from the Watergate investigations that revealed that GCHQ had fed into the NSA's unlawful SHAMROCK program of international surveillance on satellites and cables; and that this had supported unlawful FBI surveillance on US dissidents and civil-rights campaigners.

The evidence thus showed that the British had been paid by the NSA to build a station that spied on satellites run by the US and carrying mostly Western communications; and that GCHQ had supported unconstitutional surveillance of US citizens.

When I published the ECHELON story in August 1988, it got little mainstream attention. It was ignored for a decade, downplayed by many as European paranoia.

In 1999, at last, ECHELON attracted the concern of Europe's parliament, which commissioned an investigation. My report, Interception Capabilities 2000, outlined what ECHELON was and was not. With ECHELON under investigation in Europe, Newsham decided to reveal her identity as the whistleblower, and retold her story on CBS’s 60 Minutes.

The European Parliament then mandated extensive action against mass surveillance. Their recommendations were passed in full on 5 September, 2001.

Six days later, the Twin Towers in New York came down. Any plans for limiting mass surveillance were buried with the victims of 9/11, and never formally published. But proof of ECHELON became available.

Next page: ECHELON, the world's satellites, and the Snowden files
Page:
Corrections Send us news
158 Comments