Seagate has announced a not-quite 4TB, dual-port SAS SSD technology, built in an alliance with Micron: the drive giant is touting four 1200.2 products defined by their endurance. Micron is using the same tech in its S600DC SSD products.

The 1200.2 is the first SSD, Seagate says, to optimize dual-port SAS capability, resulting in sequential read speeds of up to 1.5GB/sec, compared to a maximum of 750MB/sec with the earlier 1200 SAS SSD.

They all use Micron eMLC flash, which we think uses 16nm geometry, instead of the 21nm Samsung MLC NAND used in the earlier 1200 products. Their capacities and endurances vary in an organized way and here is a DWPD/capacity matrix:

The pattern shown indicates that, as capacity goes up, endurance goes down.

The four models all have an average latency of 115μs and are optimized for reading over writing. Generally, as endurance goes up so too does IOPS and bandwidth performance, with random read IOPS and sequential write bandwidth changing most.

So, knowing this we can classify the four products like this:

The existing 1200 SSD offers multi-path I/O features to help ensure high data availability with failover redundancy and no single point of failure. Dual-porting the SAS interface in the 1200.2 helps this too. 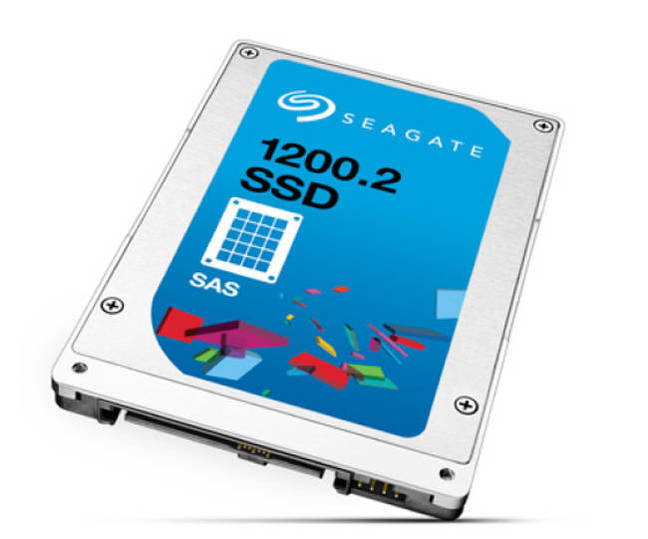 Seagate trails HGST in the SAS enterprise SSD area. How will it likely fare against HGST with its 1200.2 product?

First of all, we note that no OEM qualifications are mentioned. Secondly, Micron is selling its own and similar S600DC products. Unless Micron and Seagate have a market split arrangement, they will be in competition with each other for OEM deals.

The HGST drives' performance is 130,000 random read IOPS and 1.1GB/sec sequential read bandwidth, which the Seagate 1200.2 drives comfortably exceed as well. Interestingly, these HGST drives use 25nm Intel eMLC flash. Intel shares output from its IMTF joint venture's foundries with Micron, so we might expect the Ultrastars to move to the latest 16nm MLC flash from these fabs soon enough.

They won't get the benefit of Seagate SSD controller tech, if it's better than HGST's own, or of Micron's technical know-how, but dual-porting SAS interfaces isn't rocket science so they can get an IO speed bump that way.

Micron is being fetchingly coy with information about its new dual-port SAS drives; perhaps to give Seagate priority in the limelight.

However, there are only three models; S610DC, S630DC, and S650DC, and these will, we guess, vary by performance, capacity, and endurance for read-intensive, mixed workload, or write-intensive applications, as Seagate's four 1200.2 models do. As three into four won't go exactly, we expect Micron's range to differ in the details from Seagate's, when the details are released.

Availability and (no) pricing

The 1200.2 is available to OEMs and system builders developing enterprise-class flash storage products. It's also available to enterprises themselves looking to boost SAS infrastructure performance. It can be seen at Seagate's booth #505 at the Flash Memory Summit in Santa Clara, CA next week, and will ship to Seagate channel partners this month. There is no pricing information.

Micron's S600 series SSDs are in initial production and will be sold directly to data center equipment manufacturers and through Micron's distribution partners. ®

Who's Intel Inside and Outside today: PC chip boss installed after EVP heads for exit – plus next CFO named

Oh, and boasts over record-breaking return from IoT segment, too
Storage29 Sep 2021 |

Oh, and it would like everyone to know it had a fantastic sales quarter, natch
Storage1 Jul 2021 | 3

Micron: We're pulling the plug on 3D XPoint. Anyone in the market for a Utah chip factory?