McAfee tells El Reg: 'My shootout with the police was highly exaggerated'

'I surrendered when I ran out of ammo' - Who exaggerated it?

Wildcard infosec playboy John McAfee has spoken to The Register about his arrest on driving-under-the-influence and firearms charges at the weekend.

McAfee wants the world to know that:

The shootout with the police was highly exaggerated and in fact no one was even hit by a bullet, let alone harmed by one. The Police knew me and I don't believe their hearts were truly in the shootout, as it is not included in the official report. When I ran out of ammunition, I surrendered quietly and the officers and my self had a cigarette together and joked about my bad aim.

If there are any other questions I would be happy to assist or you can call officer Jensen, one of the arresting officers at 731 603 7447.

Neither the Register nor any other media outlet we've been able to find suggested that there had been any exchange of gunfire during McAfee's arrest. 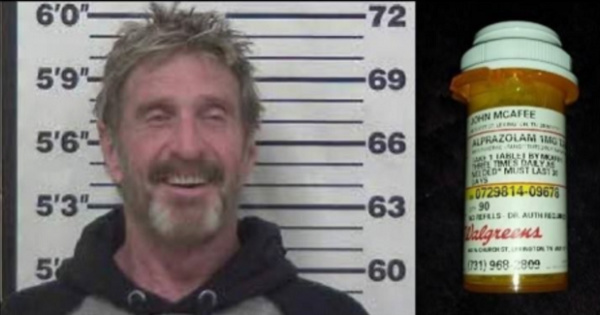 McAfee's mugshot, and what he claims is his Xanax prescription.

Just for a laugh, The Register rang the number given above and was informed that "officer Jensen" could not answer any calls until Tennessee office hours.

We then received a return phone call, however, from a different number. The heavily accented caller refused to disclose his identity but invited us to check where he was calling from.

The number given was listed on certain shonky reverse-lookup sites as belonging to a Tennessee Highway Patrol facility in Memphis. However, THP District Four HQ in Memphis gives a different number on the Highway Patrol website. We also noted that McAfee was reportedly arrested in Henderson County, which actually comes under THP District Eight in Jackson - not Memphis. Central THP headquarters is not in Memphis either, it's in Nashville, so it's clear that the number from which we were supposedly called did not indicate that the caller had anything to do with the Highway Patrol and McAfee's arrest.

The mysterious caller did inform us:

I cannot confirm whether any firearms were discharged at the scene, but John is known to us, and he is one of the best shots in the county.

If he had fired at us, we would have had officers down.

Crack shot or not, it's possible to suggest that somebody's phone pranking skills are a little rusty. ®