Days after running its EVO: Rail product off its rails, HP has landed a new hyperconverged system, updating the CS-240 product to the CS-250 by doubling RAM and using Intel Haswell CPUs to add performance punch.

It's also adding software disaster recovery, a three-node configuration, and down-pricing against Nutanix.

The ConvergedSystem 250-HC StoreVirtual (CS-250) is fitted with gen 9 ProLiant servers – the Apollo 2000 system, we think.

As with the CS-240s, the CS-250 is a 2U box containing up to four server nodes, with included storage media and StoreVirtual virtual SAN software to aggregate each node's storage into a single pool. Memory can now reach 2TB, the previous CS-242-HC StoreVirtual product having only 1TB of memory in its four-node configuration. 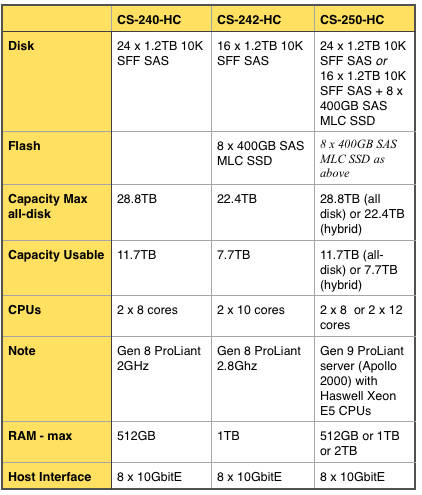 How much more powerful is the CS-250 versus the CS-240? With punchier CPUs and double the RAM, we'd expect a 50-100 per cent performance uplift.

HP says you can scale storage capacity independently from compute power. There can be up to four CS 250-HCs in one resource pool, and admins can manage multiple pools from one management console.

The CS-250s are configured for vSphere v5.5 or v6.0. As with the CS-240s, they come with OneView InstantOn. HP claims they need only 10 minutes' deployment and five minutes of keyboard time to be production-ready.

The CS-250 supports VMware, but its StoreVirtual software runs with KVM and Hyper-V as well. Perhaps we will see other CS-250 models for those environments in the future.

Customers can buy an additional set of 3 x 4TB StoreVirtual VSA licences and replicate data to any other HP StoreVirtual-based system, or any VMware cluster, to protect against disaster. It's software-only with the ability to use existing target hardware and so save money.

This CS-250 three-node config is "up to 49 per cent more cost effective than comparable configurations from Nutanix and other competitors*". We don't have a four-node cost comparison.

There's a nod to cloud hybridity with Helion CloudSystem 9.0 built on the CS-250. It's then called a hyperconverged cloud system and "adds self-service portal provisioning and public cloud bursting features", HP said.

There is a custom to-order purchasing capability, we're told. The four-node CS-250-HC StoreVirtual is available on 17 August with three-node configurations coming on 28 September. A three-node CS-250 with Foundation Carepack and VMware vSphere Enterprise lists from $121,483.

Helion CloudSystem 9.0 will be available in September. Some software-defined storage design and integration services are available now. ®

* According to a list price comparison of the CS-250 and the IDC price book list price of the Nutanix 3360 G4, each with 24x7 support.