How to make virty networks keep pace with containers

When tens of seconds is too slow: Fujitsu is getting ready to launch a technology it says can create virtual networks for Linux containers in a second.

Being readied for the Asia-Pacific Network Operations and Management Symposium in South Korea later this month, the technology is designed to address the mis-match between how quickly a Linux container can spin up, and the virtual network it needs to communicate with the outside world.

If a cloud data centre is to be as responsive as containers (“which launch in roughly 0.2 seconds”, the company says here), the network has to follow suit.

However, launching a client-segregated virtual network involves telling physical switches what you want, and if the network is built over multiple containers, Marshall says it can take several seconds.

After the as-yet-unnamed approach detects the activation of a new container, the post says, it “distributes and pools each client's network information, in the form of the interface address (MAC addresses), and the virtual-network (Virtual LAN, or VLAN) information, from the controller to the physical switch beforehand.” 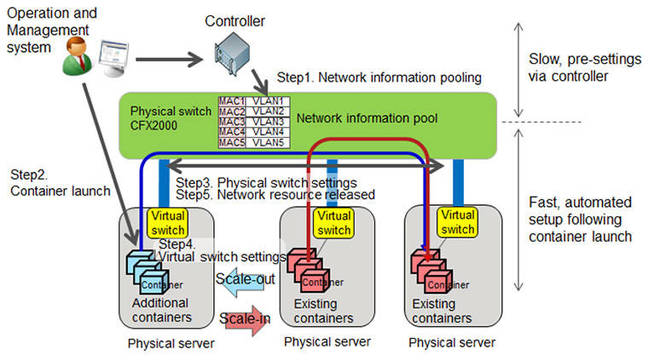 Fujitsu reckons it can speed up virtual network config. Here's how

That means instead of waiting for network settings to pass through a controller, they're configured before a container launches:

Fujitsu hopes to have the technology ready for prime time and part of OpenStack next year. ®