Pupil shape determines whether animal is hunter or prey 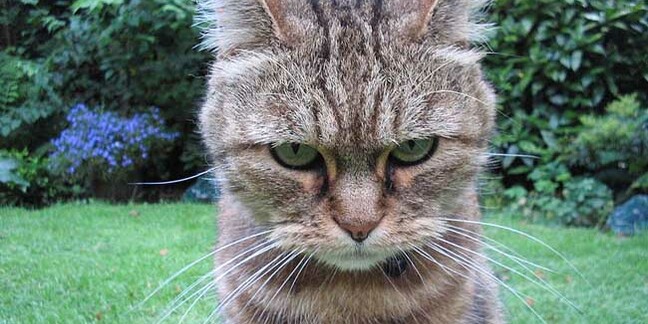 'Yes, I am your feline overlord and I do intend to crush you with my scratchy paws. While you're not looking. Naturally'

Vid Vision boffins have seen the light – they believe that the shape of pupils in animal eyes can often reveal whether the beast is a hunter or the hunter's prey.

Researchers at UC Berkeley eyeballed 214 species of land creatures during the study. They found that animals with pupils shaped in vertical slits were far more likely to be "ambush predators".

Animals with oblong-shaped pupils, on the other hand, were found to be "extremely likely" to be plant-munching softies, keeping their eyes aligned with the ground while grazing.

The study, published in the Science Advances journal on Friday, built on a piece of work entitled The Vertebrate Eye and its Adaptive Radiation penned by UC Berkeley prof Gordon Walls in 1942.

“For species that are active both night and day, like domestic cats, slit pupils provide the dynamic range needed to help them see in dim light yet not get blinded by the midday sun,” said lead author and UC Berkeley optometry prof Martin Banks, who collaborated with Durham University.

“However, this hypothesis does not explain why slits are either vertical or horizontal. Why don’t we see diagonal slits? This study is the first attempt to explain why orientation matters.”

He observed that when animals, such as goats, put their heads down to graze, their eyes rotated to maintain the pupils' horizontal alignment with the ground.

The researchers found that field of vision and binocular disparity were maximised by vertical-slit pupils.

“A surprising thing we noticed from this study is that the slit pupils were linked to predators that were close to the ground,” said postdoctoral researcher in Banks' lab William Sprague. “So domestic cats have vertical slits, but bigger cats, like tigers and lions, don’t. Their pupils are round, like humans and dogs.”

So there you have it, science agrees – cats really are evil. ®

Videos Rock and roll at 30,000 ft at hypersonic speeds

1% of 1% of users affected, but as it's Google that's still in the six figures

Facebook to ban deepfake videos in posts and ads, sort of: Vids must be believable, made by AI, and not be parody

All that other made-up crap? That's still fine, it seems

Cop a load of this: 1TB of police body camera videos found lounging around public databases

Miscreants grabbed sensitive footage belonging to officers in Miami, elsewhere, it is feared