North Korea disappeared from the internet on Monday for roughly four-and-a-half hours.

At around 6.30pm local time (or 6pm if you take the starving nation's recent decision to create its own time zone seriously) through to 11pm, the routes for the country vanished from the internet's routing tables, meaning nothing was coming in or out.

You can imagine that when an entire country's internet disappears at prime Netflix time, there will be an enormous online howling when it gets back up. So far, we've seen one tweet.

Of course that's what happens when your country has just four advertised networks (as opposed to, say, South Korea's 18,000 or China's 41,000), there are just 5,500 websites, and the 4,000 people that are allowed on the broader internet have to get special government permission to do so. Even so, we bet Kim Jong-Un was frustrated not to get his Monday night fix of Dexter. 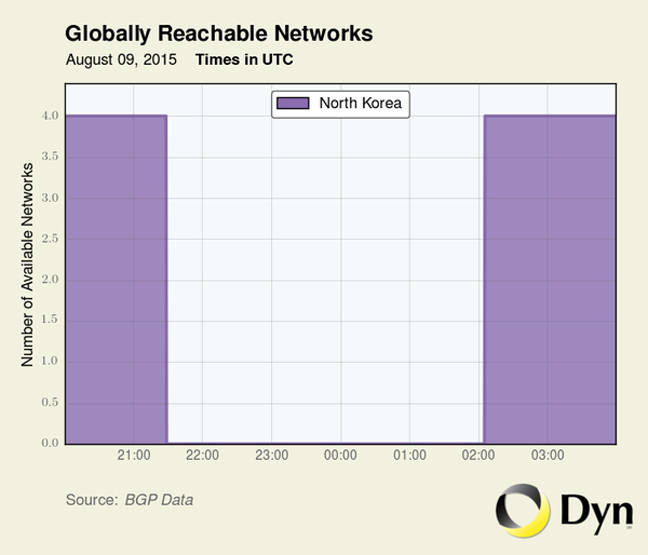 And we're down. North Korea drops off the internet and reappears four hours later.

Dyn Research, which noted this most recent failure, also reported on the last time that North Korea's internet vanished without a trace, all the way back in... December.

Back then, Dyn summed it up as "a fragile network under external attack," although it also noted that power problems could also be a likely cause. Yes, it is possible that the entire country's internet went down because the cleaners needed to reach under a desk and the cord wasn't long enough...

Dyn's chief scientist Jim Cowie told El Reg about this latest collapse. "The global BGP routing table gives directions on how to reach blocks of IP addresses. We can count these 'advertised networks' to get a sense for how much internet belongs to a given country, or ISP, or other organization. It's not just the count of networks that matters, however.

"The internet's resilience comes from having lots of different paths to fall back on in times of trouble. There's essentially one international network service provider carrying internet traffic in and out of North Korea's four networks, and that's China Unicom. If that connection to the outside world fails, or if the routing infrastructure at North Korea's border fails, the entire country can be left without Internet service. That's what has happened repeatedly."

As for how to fix the Hermit Kingdom's internet woes, Cowie suggests that, over time, North Korea will probably follow the same path as other growing internet economies: building more networks, connecting them to the outside world through more service providers, and using a diverse set of physical paths so that failure in one part of their infrastructure doesn't take down the entire country. ®