'WOMAN FOUND ON MARS' – now obvious men are from Venus

Pics Yet again citizen observers have spotted something odd on Mars – this time what appears to be a woman in a long flowing gown standing on a cliff face. 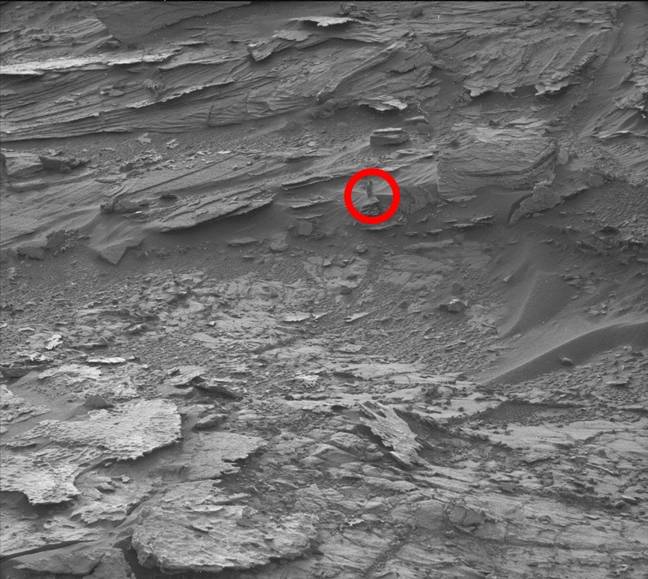 The truth is out there; or maybe not

"It looks like a woman partly cloaked. The woman seems to have breasts... indicated by the shadow on its chest," reports hard-hitting investigative journal UFO Sightings Daily, which first published the picture.

"We also see two arms that are lighter in color and what looks like a head with long hair. It's hard to tell if this is a living being, or a statue of a being from long ago. However, a statue that small would be eroded and destroyed easily, so it has a higher chance of being a living being."

The image in question is certainly real enough; it was published by NASA's Jet Propulsion Laboratory as part of its continuing upload of data from the Curiosity rover to the general public – who, of course, paid for the mission.

But the chances of it being a woman are as high as Tim Cook whipping out a Windows Phone on stage in San Francisco, and phoning Steve Jobs himself with it.

It's not the first time Mars watchers claim to have spotted oddities based on photography from Curiosity. In 2013, what seemed to be a metallic Martian flower was spotted growing from a rock, but it was later determined to be a ventifact – a polished piece of rock exposed to wind erosion.

A year later there was another sighting, this time of a Martian doughnut lying by the wheels of the Curiosity rover, which one "scientist" claimed was a fast-growing fungus. Rhawn Joseph PhD, who describes himself as a scientist who "runs with the wolves," tried unsuccessfully to sue NASA for not taking more pictures of the object.

As it turns out there was little need to. The object was later shown to be a chunk of rock kicked up by one of Curiosity's wheels as it turned, and this was confirmed when the rover looked back and saw the hole it had left behind.

El Reg suspects that the team at NASA is getting a little sick of having to waste time with all these so-called sightings, but there are going to be many more going forward as Curiosity and its follow-on rovers explore the Martian surface.

The reason is a peculiar, but sometimes useful, quirk in our mammalian brains called pareidolia, whereby we can seemingly see objects among random data. It's the same thing that keeps on making people see Jesus in a bucket of pizza sauce or a slice of toast.

It has been speculated that pareidolia could have had an evolutionary advantage at one time, because it would help us distinguish the shape of predators in deep camouflage. Unfortunately it now wastes a fair bit of NASA's time.

That's not going to satisfy some people of forward-looking and penetrating personal insight who say that NASA and other government agencies are orchestrating a mass cover-up about life on Mars – glossing over the inconvenient fact that if there was, the space agency would shout it from the hilltops so it didn’t have to beg Congress for the tiny amount of the federal budget it receives.

President Obama himself is a Martian tourist, two seekers after truth have claimed, saying he was recruited to DARPA's telepathic time and space traveling unit assembled under the moniker Project Pegasus. The White House has denied the claims, presumably after a lot of giggling.

Maybe they are hoping that this latest female sighting is just a woman who wants us to know that the truth is out there, although standing in front of the rover and waving a sign saying "Wake up sheeple of Earth" might be more effective. ®