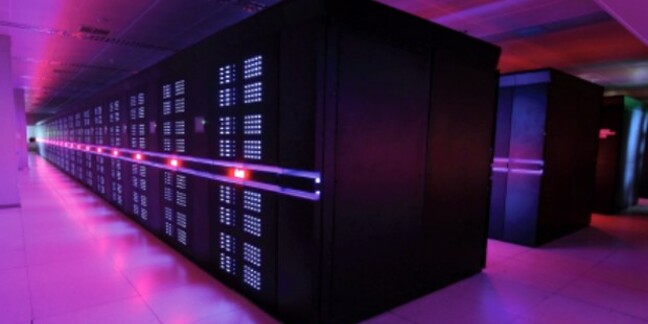 HPC blog Four teams from Asian universities entered the ISC’15 Student Cluster Competition arena in a bid to do glorious cluster combat and chisel their names into HPC history. Who are these brave students? Where do they come from? What do they want?

The kids from Jamia Millia Islama brought some real firepower to their first Student Cluster Competition. While most of the teams are driving 6-8 node hybrid systems, Team India is styling and profiling with a four-node, 8 K40 GPU cluster that, with the addition of liquid cooling, should be able to really scream on some of the applications.

That’s as long as the drivers of said screaming cluster know how to drive it efficiently.

And, judging from the interview on the video, Team India is in pretty good shape at this point of the competition. It claims that it's doing fine with all of the applications and not seeing any problems – but we’ve heard that a lot over the years. The final scores will tell the story.

One bit of news: the Indian kids said that there’s an initiative to establish a Student Cluster Competition within India. This would be great, as there have to be lots of schools there who could field competitive teams that can then compete in the international competitions. And for my part, I’d love a chance to cover an event in India; I’m already shopping for a khaki Nehru jacket.

Team NUDT: When it comes to nodes, sometimes less is more ...

Team NUDT (National University of Defense Technology) is a cluster competition veteran. It got its ticket stamped for the ISC’15 competition by nabbing second place in the Asian Student Cluster Competition a few months ago.

We talked about how the team is doing on the applications. The team brought out an interesting point, saying that they found it was better to use four nodes rather than eight nodes when running Octopus.

This could either mean that the organisers are tossing the team a curveball with the app or data set (or both) ... or it could mean that NUDT hasn’t quite explored all of the different ways to maximize Octopus parallelism at this point of the competition.

We also discussed the team hierarchy – to the general amusement of all. Although Figouway (bad phonetic spelling on my part) is the captain of the team, I have the feeling that Jou Jing (the female seated on his left) is really driving the bus. What’s Chinese for “you’re NOT my supervisor!”?

Tsinghua is one of the elite teams competing at the ISC’15 cluster competition. It's earned this reputation by either winning, or placing highly, in each of its four previous international outings.

Tsinghua typically doesn't talk a lot during interviews, which could be attributed to its members either wanting its cluster to do the talking.

At this point in the competition, Team Tsinghua looks to be doing pretty well except for a heat problem with its cluster. This isn’t surprising when you consider that its cluster consists of eight nodes with 288 cores, 1TB of memory, and six NVIDIA K80s – a larger configuration than almost all other competitors.

During the filming of this spot, they had the skins off their rack to aid air flow to this monster system. As we’ll see in an upcoming video, another team with a massive cluster – South Africa – was facing the same problem.

Team USTC: No confusion – at least not now

When checking in with USTC, the first words out of the team's mouths were "everything is OK ... erm ... now". This made me curious, so I delved deeper. I didn't get a huge amount of detail but did hear the words “start from scratch”, which always sends a chill into any cluster competition warrior.

USTC is driving one of the larger clusters, with eight nodes and six GPUs. Not large enough to have problems with heat buildup (unlike Tsinghua and South Africa), but plenty large enough to challenge for the championship.

USTC is one of the teams that are ready to take that next step and win a cluster competition. It's been in among the leaders in all of their prior bouts, but just hasn't quite made that step into the winners' circle – at least, not yet.

Next up we’ll take a look at the two remaining teams, Purdue/EAFIT and the returning champion South African team. ®

HPE gets carried array with HPC: Partners up with DDN