Is this the most puzzling DEF CON attendee badge yet on record?

Marvel at the mysteries of this playable poser

DEF CON 23 Attending the DEF CON hacking conference in Las Vegas is always an unusual experience, but among the most celebrated features of the event are its unusual attendee badges.

Reg man Iain Thomson attended this year's event – the 23rd – and we at Vulture Annex in San Francisco got a kick out of scratching our heads at the mystery of the latest badge.

In case you're unaware of the tradition, no mere plastic laminate is good enough for DEF CON. Over the years, the conference's admission tags have morphed into a variety of charming and perplexing inventions, often incorporating circuit boards with chips, LEDs, and other components for attendees to try to hack.

Since 2012, however, the badges have been the brainchildren of official DEF CON Puzzlemaster General LostboY or 1o57 (aka Ryan Clarke), who has crammed them full of brain-teasers and puzzles, often with cryptography at their core.

This year's concoction was a doozy. Instead of the usual digital gizmo, LostboY decided to go fully analog – in the form of an actual, playable 7-inch vinyl record pressed especially for the DEF CON 23 conference.

The record Iain received was on yellow vinyl with a yellow label – as Press, we don't qualify for the white badge reserved for Humans – but we hear through the grapevine that the content on all versions of the record is the same.

Just the look of the record makes it mysterious. You can see a full view of the front and back sides, here. Besides the old-timey line art, one side features what looks to be a message written in some kind of secret alphabet or shorthand. 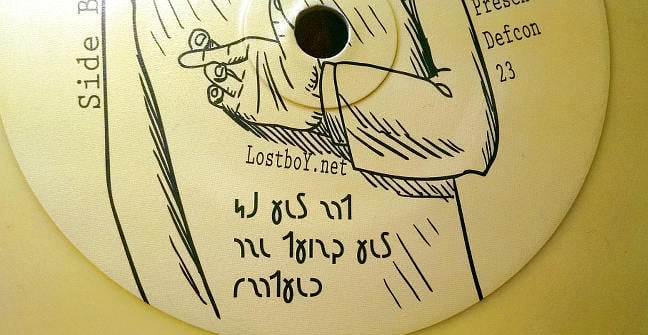 Here's a closer look at that mystery script. Other versions of the record have different writing

As is typical of records, if you look very carefully, you can see writing scratched into the inner grooves of the vinyl. One side features the number "13782 1A 1057-271828" – which might just be a code use by the pressing plant to keep track of the record – along with the phrase, "THE DARK TANGENT PRESENTS DEF CON 23."

But it's when you actually play the record that the real mystery starts. When played at 33⅓RPM, it lasts a little over three minutes and 30 seconds. [And 33 happens to be the number of degrees in Freemasonry. Coincidence? – ed.] Let's take it for a spin, shall we?

'Round and 'round she goes, but what she's talking about, nobody knows

The recording starts with what seems like a synthesized or partially synthesized voice – which sounds something like Bane from the film The Dark Knight Rises – reading the last few paragraphs of "The Hacker Manifesto."

Next up is a definitely synthesized, female-sounding voice reading off a string of decimal numbers separated by dashes. Somewhere in the middle of the sequence, she utters what sounds like the phrase "to June 18th 2024," reading out the year, before finishing off with some more numbers. We've gone ahead and transcribed the sequence for you, here:

We haven't a clue what it means, but we think it's interesting that all of the numbers are between 01 and 26 – in other words, no number is higher than the number of letters in the alphabet.

The recording continues with a long string of DTMF touch-tone sounds. Being lazy and a little dual-tone deaf, we ran these through software that detects such tones and we came up with the following sequence:

If you look at the parts we've emboldened, you'll see there are two sections of the sequence that repeat the equivalent of LostboY's handle, "1057," three times. It's your guess what that means, but maybe the sequence in between them has some special significance.

Also notice that, other than the "1057" parts, the sequence does not contain the DTMF codes for the numbers 1 or 0, or the * and # symbols. In other words, once again, only tones that correspond to letters on a phone were used.

We tried playing Side B of the record but it didn't seem to yield any more clues. Rather, it contained an amusing, hacker-related hip-hop song called "All the Things" by an artist called Dual Core. If you're interested, here's the official video for that:

That's about all we've been able to decipher for now. Other folks are similarly puzzled; you can join in here and also see a gallery of some of the other, different badges that were handed out at DEF CON 23. One not to miss is the "Uber Badge" – a sci-fi looking triangular medallion that's reportedly packed with radioactive material.

The DEFCON 'Epic' badges: full of radioisotopes and decorated with a running particle accelerator pic.twitter.com/Pfiiu2iDCw

Chime in with any theories, conspiracy or otherwise, in the comments – along with your own DEF CON tales. ®