SanDisk gets all Tardis-like and shrinks cells to increase capacity

Generally, they are faster than the Gen 1 products, although their endurance has fallen to 1.8 drive writes per day (DWPD) for five years from the Gen 1’s 3 DWPD rating.

Sequential read/write bandwidth is up to 530/460 MB/sec, compared with 450/400MB/sec with the Gen 1 product. The average latency is 56μs with read latency being 80μs, and they retain the Gen 1 6Gbit/s SATA interface.

SanDisk is selling these flash slabs to hyperscale cloud service providers (CSPs) and as a cost-efficient alternative to disk drives, saying they provide more predictable performance.

It also says they are suited for software-defined storage (SDS) vendor environments. This doesn't enable us to differentiate between a hyperscale Nexenta environment, one using a few servers with DataCore software, or proprietary storage arrays described as software-defined by their vendors because they, well, use software. 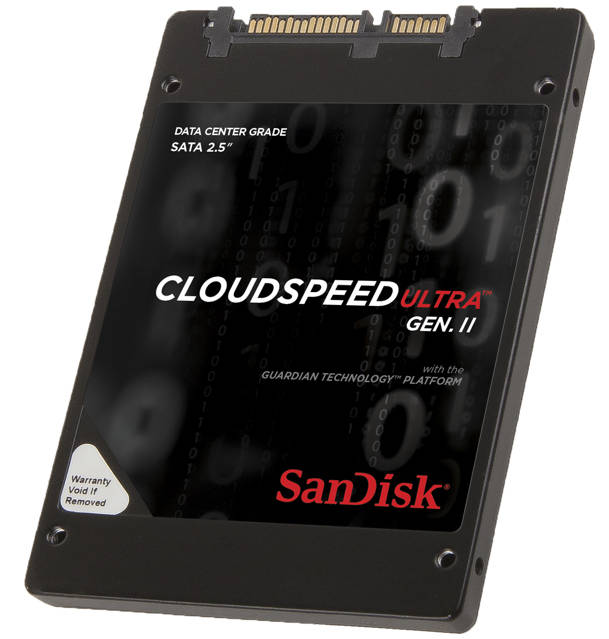 SanDisk said the Gen 2 Ultras are priced at a little over $0.04 per IOPS, not telling us whether this is read or write IOPS; that makes a considerable difference.

If that floats your data centre boat, then, well, cool.

Reading between the lines here, the CloudSpeed product will probably be priced not to have a leading edge low $/GB cost, but a better total cost of ownership and $/IOPS than disk drive alternatives for the same level of IOPS performance. Not cheap, in other words.

The use of 15nm NAND is probably the limit in terms of lithography shrinking.

Any future Gen 3 CloudSpeed Ultra will almost inevitably use 3D NAND and quite possibly get performance boosts as well as capacity rises from that multi-layered NAND using larger lithography.

CloudSpeed Ultra Gen. II SSD will be available for select CSP and SDS customers in August and on a staggered channel release through the Enterprise Channel Partner program.

SanDisk is not saying what the “select” word means. Check ‘em out at SanDisk’s booth #207 at the Flash Memory Summit, 12-13 August, if you’re in Santa Clara. ®

Financial contortions will be considered, but not with Lee Jae-yong under arrest