An officer at the La Reforma penitentiary, on the outskirts of the Costa Rican capital San José, became suspicious of the bird and detained the winged narcotic messenger after luring it with food. 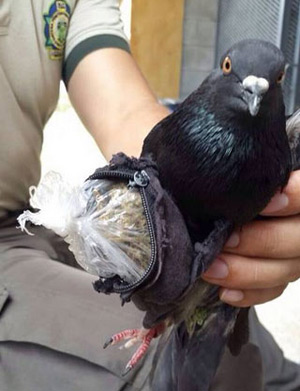 Strapped to its body was a pouch containing 14g of cocaine and a similar weight of marijuana, destined for an unknown recipient in the jail's medium-security wing.

Pablo Bertozzi, head of the prison police force, explained that the pigeon specifically flew to that wing, so the pouch's contents "weren't for delivery to just anyone".

He said: "On other occasions they've used cats to deliver drugs from wing to wing, but this is a first. We're faced with another way of operating, and they're always looking for new ways to smuggle drugs, so we have to be alert."

The authorities say they have no idea how the agreeably-dubbed narcopaloma ("drug dove") was trained, or who attached its cargo outside the prison. The offending bird is still being held at La Reforma, pending transfer to a sanctuary. ®