Tarek Loubani, an emergency physician working in the Gaza strip, has 3D-printed a 30 cent stethoscope that beats the world's best $200 equivalent as part of a project to bottom-out the cost of medical devices.

Loubani together with a team of medical and technology specialists designed the stethoscope and tested it against global standard benchmarks, finding it out performed the gold-standard Littmann Cardiology 3.

The Glia project was born sometime after the 2012 Israeli incursions into Gaza, where Loubani and his medical colleagues were in short supply of the life-saving equipment and forced to listen to the heartbeats of scores of wounded Gazans with ears placed on chests.

Since then the device has been a hit with field and hospital practitioners across the modern and developing world who have tested it in hospital and field theatres over the last six months.

"I had to hold my ear to the chests of victims because there were no good stethoscopes, and that was a tragedy, a travesty, and unacceptable," Loubani told the Chaos Communications Camp in Zehdenick, Germany.

"We made a list of these things that if I could bring them into Gaza, into the third world in which I work and live, then I felt like I could change the lives of my patients.

"I wanted the people I work with to take it, and to print it, and to improve it because I knew all I wanted to do was bring the idea." 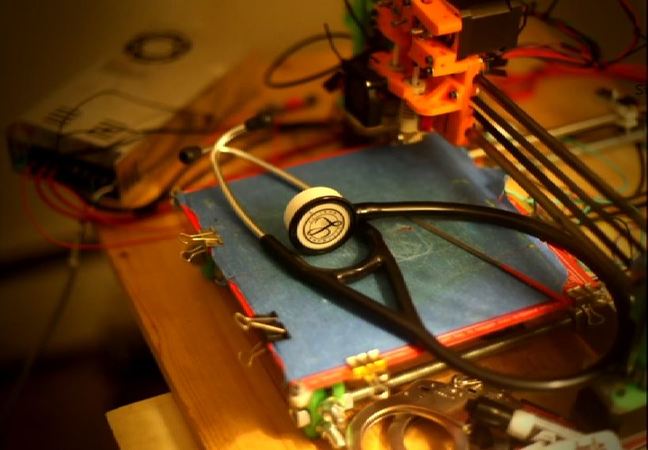 Loubani says one Gazan hospital covering more than a million patients had a single otoscope [the instrument used for peering into the ear canal – ed.] and a handful of stethoscopes. Top flight equipment cost an entire month's salary for a Palestinian doctor.

"This stethoscope is as good as any stethoscope out there in the world and we have the data to prove it," Loubani says.

He is so confident of the device that he expects the peer-review process to be a "cake walk".

The device was tested using a the standard practice of pressing it against a balloon filled with water - a test dubbed the Hello Kitty protocol given the availability of cat-branded balloons at the time.

Loubani says sterilization is not a problem with the devices, and metal can be used if necessary.

The team is now developing cheap but effective 3D-printed medical devices including a pulse oximeter which monitors blood oxygen levels in the blood and is at a stage ready for calibration.

They are also working on an electrocardiogram for cardiac patients and will work on haemodialysis machines.

These he says are three of the most ubiquitous and expensive life-saving devices in any medical centres.

Loubani says the concept of the 3D-printed stethoscope was inspired after he tested his nephew's stethoscope toy and found it performed much better than expected.

He found that costs remain high despite the expiration of 1960s-era stethoscope design patents, and so gathered Glia's team of hackers and hardware boffins to build the 3D-printed device.

It cost about US$10,000 to develop, and has been released as an open source model for anyone to use.

Loubani says the project is following the footsteps of the free software movement and aims to replace expensive proprietary solutions. He hopes that within 25 years the devices will be common-place in the Third World, and be the "Apache of the medical world".