K2 arrays are built from dual-controller K-blocks which can scale up and also scale out to a general maximum of four K-blocks, although 8 K-block configurations are possible. A table provides a quick gen-5 and gen-6 K-block comparison: 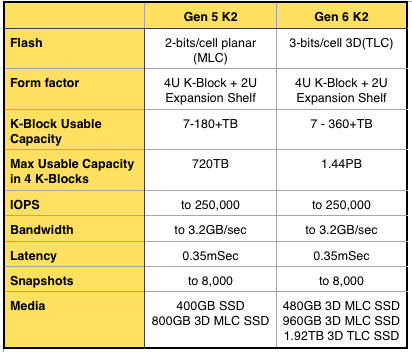 Kaminario says customers will continue to be guaranteed effective capacity: if a customer is unable to store the capacity that is guaranteed, they will get no-cost additional hardware to expand their system and fulfil that guarantee. It says it's the only flash array supplier offering this promise. 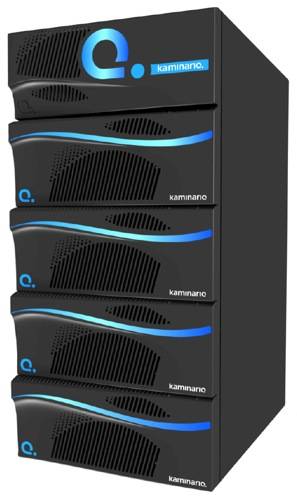 There is native, snapshot-based, asynchronous replication, so a K2 array can replicate to a local or remote K2 to provide disaster recovery.

There is also a Perpetual Array program, under which customers can mix and match different-generation K-blocks within a K2 array – meaning no fork-lift upgrades – and enjoy non-disruptive upgrades.

Kaminario enjoyed quadrupled bookings over the past year and we have learnt that SanDisk is a customer. It is majoring on three pillars, as it describes them: scale (up and out), cost-efficiency and ease of use. It is focused on winning general-purpose enterprise storage deals, saying its flash storage is now so cost-efficient that you no longer need disk.

There is a 7-year warranty, Kaminario saying the way it handles flash means there are no concerns over 3D TLC flash endurance – it can do 5 to 10 drive writes/day. As most customers do less than 1 drive write per day, the drives will theoretically last for a long time.