Revenues rose but infernal currency rates turned it into a fall

With its latest results, HP's third-quarter storage revenues went down 2 per cent on the annual compare, not being pulled up by industry standard servers' revenue which rose 8 per cent. But at constant currency – ignoring foreign exchange rate changes over the year – they rose 7 per cent.

The Enterprise Group's revenues were $7bn, of which storage contributed $784m. It was $796m in the equivalent quarter a year ago.

The decline continues HP storage product's dismal trend you would think, but it is a currency rate artefact. HP also finally achieved crossover, with newer converged storage (think 3PAR) revenues of $393m exceeding traditional (think EVA) storage product revenues of $391m. It's been a slow haul and makes us realise just how tenacious installed base product revenue flows can be – a fact that has not escaped NetApp.

So HP is doing comparatively better than EMC, IBM and NetApp with its storage portfolio. That's encouraging. 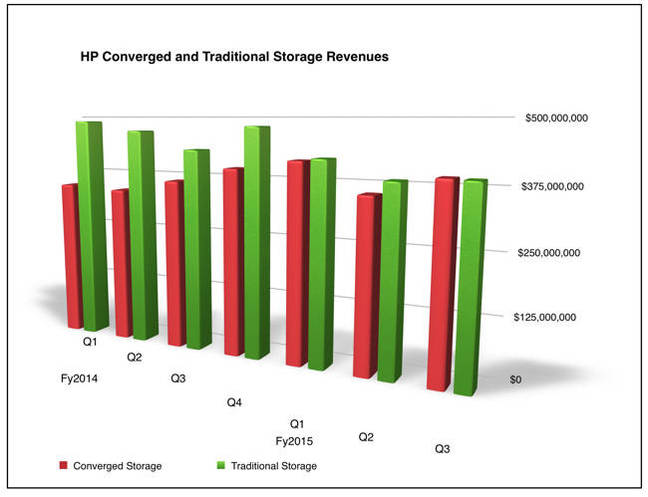 Hopefully, once the separation from the printers and PCs part of HP is complete, the new-fangled Hewlett-Packard Enterprise will get its storage act even more together and start motoring faster still. ®