Twenty years since Windows 95, and we still love our Start buttons

Back when you could still get results by inserting a floppy

Microsoft released Windows 95 on 24th August 1995, followed a week later by Office 95, and accompanied by a publicity campaign featuring the Rolling Stones song Start Me Up.

Windows 95 was a great success, despite not being the most stable of operating systems. Microsoft’s own Windows NT 3.1, released two years earlier, was built on stronger foundations, but high system requirements and lack of compatibility with many DOS applications and games made it unsuitable for consumers. Windows 95 was better in both respects, running in as little as 4MB of RAM – though painfully, with 8MB a more realistic minimum – and retaining DOS complete with 16-bit device driver support.

At the time, most PCs ran Windows 3.1 or 3.11 (Windows for Workgroups), and IBM was pushing OS/2 as a “better Windows than Windows”. Windows 95 was a considerable improvement on Windows 3.x, with pre-emptive multitasking, mostly 32-bit code, and plug and play hardware detection. There was also new support for “portable computers”, with a battery indicator on the taskbar and the ability to suspend the system without turning it off completely.

Windows 95 introduced long filenames and a redone user interface including the taskbar and Start menu, replacing Program Manager in Windows 3.x. The Start menu was a big improvement if you had a large number of applications installed.

Although Windows 95 was behind the NT series in stability, security and multitasking, its user interface was more advanced. A Windows 95 style user interface arrived on NT 4.0 a year later. The Start menu and taskbar concepts endured, with incremental improvements up to and including Windows 7 in 2009. Windows 8 made radical changes for better support of tablets and touch control, but proved unpopular with users causing Microsoft to backtrack in Windows 10.

Windows 95 was a pleasure to use compared to earlier versions and professionals learned to put up with occasional reboots (it would also hang of its own accord if left running for 49.7 days).

The warm reception for Windows 95 marked the moment when IBM’s efforts to achieve a mass market for OS/2 became hopeless. It was not only the fresh user interface, but the work Microsoft did to ensure successful installation on a wide variety of hardware. 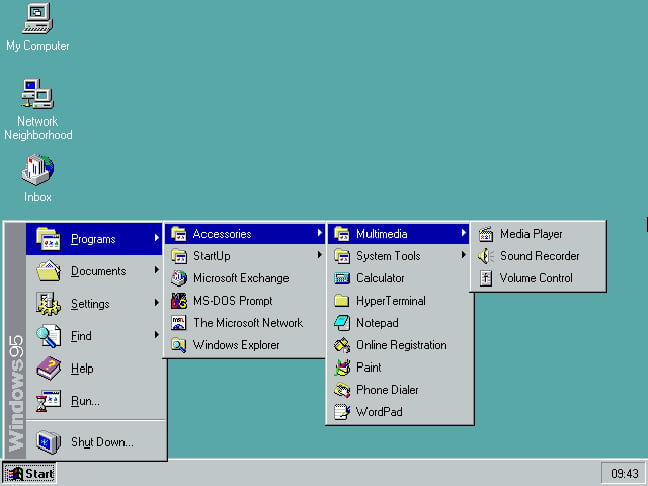 The Start menu in Windows 95

The question of why the public accepted a substantial user interface change in Windows 95, but not in Windows 8, would make a nice topic for someone to research. There are some parallels, with Windows 95 trying to accommodate DOS while moving users to Windows, and Windows 8 trying to accommodate desktop users while enabling tablets and the Windows Store. Windows 95 had better design, less competition, and more obvious benefits.

You could install Windows 95 from just thirteen 1.68MB floppy disks. The ISO for Windows 10 is nearly 4GB.

Twenty years of improvements, or twenty years of bloat? It is both; but it's good to see that Microsoft and others are rediscovering the benefits of small, with projects like Nano server and Windows 10 IoT. ®