There's good news and bad news for Microsoft because Windows 8.1 is slipping fast

Windows 10 now has 5.95 per cent of the desktop operating systems market, according to the folks at StatCounter.

There's good news and bad news in that result,.

The good is that StatCounter has revised its figure for Windows 10 market share in the week of August 10 to 16. Last week, the outfit said Redmond's latest had won 4.95 per cent of the market. It's now adjusted that number to 5.39 per cent, meaning that in Windows 10's second full week on the market it added 42.59 per cent market share.

Results like that give us a decent reason to take take StatCounter's data with a pinch of salt, because while the outfit has tracking codes embedded in some three million websites and that's a lovely big sample, it does produce some odd wobbles and jumps. 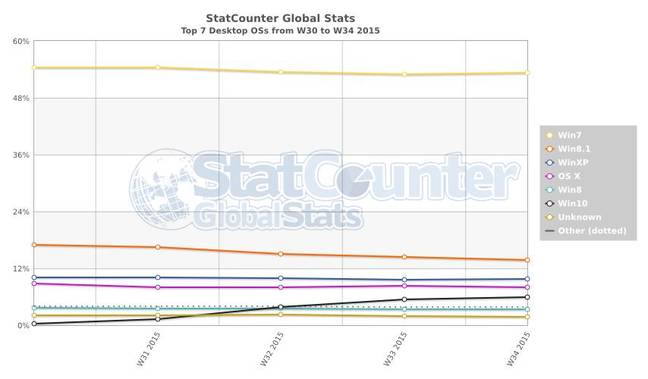 While Windows 10's growth looks to have slowed, winning nearly six per cent of a global market in a month is quite a feat. Microsoft's problem, however, is that PCs are no longer the main game. When Redmond controlled 90 per cent or more of the desktop market it controlled 90 per cent of just about all connected computing devices. These days there are billions of smartphones out there, most running Android or iOS. StatCounter says Windows phone has 2.17 per cent market share. The forthcoming launch of Windows 10 for mobile devices, which Redmond hopes will go well once the OS runs Android apps, will offer another measure of whether the new operating system is a success. ®