He created gadgets, vehicles and locations that might have been science fiction but had a crucial sense of realness and practicality that made us believe in the worlds of tomorrow that we were being shown.

One film stands out from Syd's filmography, though: Tron, released on October 21, 1982 and celebrating its 35th anniversary this weekend.

Tron wasn't a speculative vision of the future, it was the first major movie to attempt to show a virtual world created inside the mind of a computer.

Tron was the first of its kind. In an era when movies based on video games are commonplace it's hard to cast your mind back to the time when it didn't happen, the time when there were no video games to base films on.

Pong, the first commercial video game, debuted in 1972 as an arcade game from Atari under pioneer Nolan Bushnell and the engineer who brought it to digital life, Allan "Al" Alcorn. The home version appeared, against the odds, in Sears stores in the US in the run-up to Christmas 1975.

It was one of those primitive consoles that gave Tron's writer/director, Steven Lisberger, the idea for a science-fiction drama set inside the console. Bearing in mind the crudeness of Pong's graphics it was an almighty leap of the imagination.

"Everybody was doing backlit animation in the '70s, you know. It was that disco look. And we thought, what if we had this character that was a neon line, and that was our Tron warrior – Tron for electronic.

"And what happened was, I saw Pong, and I said, well, that's the arena for him. And at the same time I was interested in the early phases of computer-generated animation, which I got into at MIT in Boston, and when I got into that I met a bunch of programmers who were into all that.

"And they really inspired me, by how much they believed in this new realm."

The man Lisberger tapped to visualise his new realm was Syd Mead. 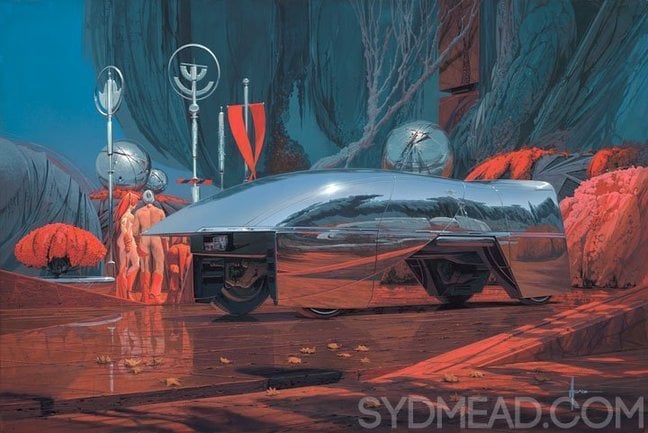 The giant floating aircraft carrier, the digital tank and, most memorably, the iconic lightcycles all came from Mead's fertile imagination.

Born in 1933 in St Paul, Minnesota, Mead studied at the Art Centre School in Los Angeles and was immediately plucked to work on Ford's advanced stylings studio. He proceeded to set up his own design studio working for prestigious clients including electronics giant Philips Holland and Intercontinental Hotels. A move to California helped expand his work into films. His calling card, as demonstrated so emphatically in Blade Runner, also 35 this month, was to come up with vehicles and objects that looked real. Artefacts with gravity and heft.

For Tron, he threw all that away. "Tron was a game on the backside of a CRT, there was no gravity so I plugged that into my design mentality and that's how I came up with the light-cycles," Mead told me.

I spoke to Syd about the film, where his ideas come from and where the amazingly vital 85-year-old designer might be headed next. We've chatted before, and I caught up with Syd at his home in LA over email.

You have been credited with lots of overlapping titles: production designer, visual futurist, conceptual artist – which one do you think covers your role most accurately?

Never production designer. That is a title that is earned by a select group of artisans, usually union members, and I do not belong to that union. I always prefer "visual futurist" as it seems to encompass more of what I'm asked to do.

What real-life products of today look to you the way that the future promised in the 80s?

I think electronics, especially the cell phones would be top of the list.

A lot of sci-fi movies have taken their inspiration from that grimy future aesthetic you pioneered. Do you ever feel like that's the default now, as if the look of Blade Runner is how audiences expect the future to look and it's hard to do anything different?

What I did was to illustrate a script. It was not my idea of the future but that of Philip K Dick who was not a very optimistic person. Some audiences might agree with him and a lot of sci-fi movie people might copy that look for their "look" of the future but I think that is more the result of taking the easy way out. It is always easier to copy and imitate than it is to think of something original. 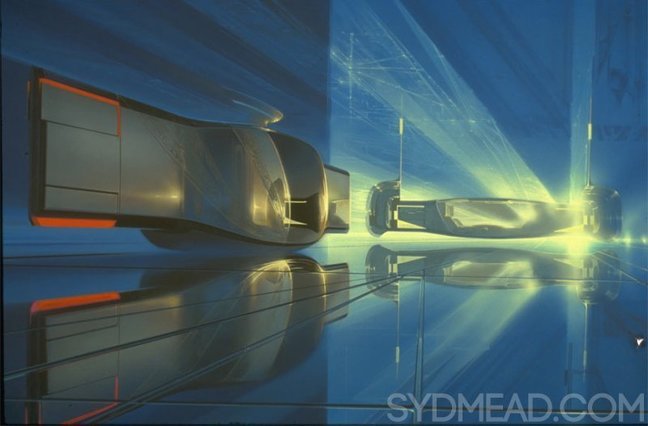 Of all the futures you've imagined – Elysium, Star Trek, Blade Runner, Tomorrowland, so many options – which one would you most like to live in?

If I had to choose I would elect to live in the bachelor pad I designed for the January 2000 issue of Playboy magazine. It was a private spaceship that docked on an interstellar mother ship much like the private railroad cars of the early 20th century would be transported around the country on transcontinental railroads.

What one gadget or vehicle from your films would you like to see produced in real life? I'll tell you now, mine is that neat little memory-deck from the cruelly overlooked Strange Days!

I often included an personal floating orb, kinda like a watchdog, Alexa, Siri, GPS and security system all rolled into your own private companion drone. A "majordrone-o" if you will.

What tools do you use when you're working? Is it all paint or do you use computers as well?

Both. I always start off with pen and ink sketches, scan them in to colorize them and play with perspectives, then, depending on the needs of the client, complete the project in a full-colour gouache rendering, but those are rare these days.

You worked on Johnny Mnemnonic – given how influential his work has been are you surprised not to have seen more adaptations of William Gibson's books?

Not really. There's a lot of sci-fi out there.

Was Tron a different challenge because the action doesn't take place in the "real" world?

There's talk of a third Tron movie or maybe a VR experience – has anyone talked to you about it? Would you be interested in returning to that world? If so, what would you do that's different to keep Tron ahead of where we are right now technically?

NO. And NO! Been there, done that.

What is next for you? More films? More video games? Creating art for its own sake?

All of the above.

Astoundingly, for a designer whose work is so identified with the dawn of the digital age, Syd’s preferred medium is paint. That said, this creative veteran has a healthy respect for the modern method. 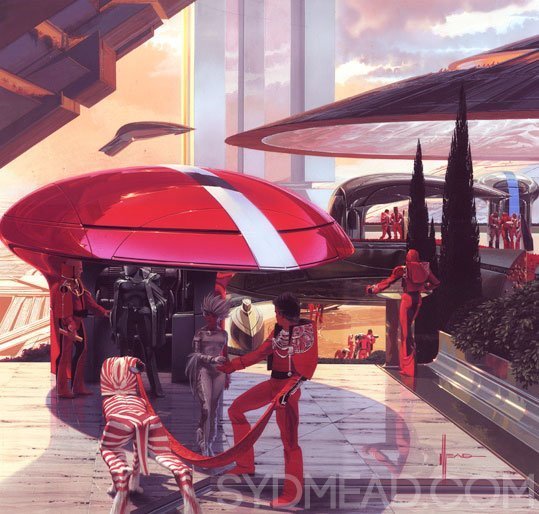 Asked about his attitude to digital design tools, he said: "The best thing about working with software is you can make an iteration and then save it. When you're doing things manually there's no command-z. If you make a mistake, you've got to cover it up... scrape it... start over."

One of Tron's key legacies was its use of digital effects. The computer-generated imagery in the final film was fairly minimal, combined with backlit hand-painted cell animation to create a unique futuristic look.

The original 1982 Tron was actually disqualified from that year's Academy Award nomination for special effects, because the Academy felt at the time that using computers to create movies was "cheating".

There was very little computer animation technology involved. Each frame of Syd's lightcycles, for example, was rendered as a still and then exported and a new set of co-ordinates for each element in the shot were entered by hand to create the next frame.

It would take 600 sets of manually entered co-ordinates to render four seconds of finished film. The "state-of-the-art computer" used to create the film's key special effects boasted 2MB of memory and 330MB of storage.

Using a type of "dial-up" connection at Magi, film-makers on the West Coast were able to immediately view the work and request adjustments that could be completed within the same day. This eliminated the need to ship prints back and forth across the country, saving time and money.

A press release for the film revealed that that Magi used a Perkin Elmer System 3240 and a Celco CFR 4000 computer projector, while Triple I used a Foonley F-I. Each frame of animation required 5-75 million calculations.

Some of the effects were a little more basic; the Identity Discs are apparently just painted Frisbees. ®