Spends time scuttling around. As does the crayfish 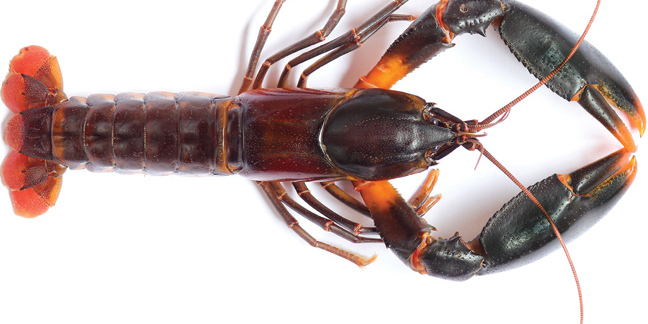 ‪A German biologist has decided to name a new species of crayfish he helped describe in honour of international whistleblower Edward Snowden.‬

The Cherax snowden hails from the freshwater tributary creeks of West Papua, Indonesia. Parallels between the crustacean and the former NSA contractor are tricky to discern.

The only obvious one is that Snowden, like a crayfish, might be described as having a hard shell. Both certainly have to hide from their enemies.

Snowden crayfish are harvested for the global aquarium trade (where it's known commercially as “orange tip” or “green orange tip”), as well as feeding the local population. However, pollution has put the species' future in doubt.

Christian Lukhaup and two other researchers (Jörn Panteleit and Anne Schrimpf) hit on the whistleblower-themed moniker in naming the crustacean for an article published in ZooKeys.

Zoological researchers have free rein on naming rights in academic journals for the species they are the first to describe.

"After describing a couple of new species, I thought about naming one after Edward Snowden because he really impressed me," Lukhaup, an independent researcher, told The Washington Post. "We have so many species named after other famous people who probably don't do so much for humanity. I wanted to show support for Edward Snowden."

Germany is one of the world's most privacy-conscious countries, thanks largely to the invidious activities of the Stasi in the former East Germany, as well as the human rights abuses of the Nazi era. Snowden is lauded as a champion of privacy in Germany, as evidenced by the renaming of a Dresden square in his honour back in June.

Cherax snowden does seem like a bit of a one-off infosec celeb-themed moniker. However, biology researchers writing about cephalopods might care to note that cryptography guru Bruce Schneier regularly blogs about squids as light relief from writing about vulnerabilities, cryptography, privacy and airline security. ®