This bipolar nebula, which lies some 4,000 light years from Earth in the constellation Ophiuchus, has two stars at its centre. The larger body – some 1.0 to 1.4 solar masses – is largely spent, having blown its outer gas layers into space.

Its ultimate fate is the same as that suffered by its smaller companion, which has become a white dwarf weighing in at 0.6 to 1.0 solar masses. 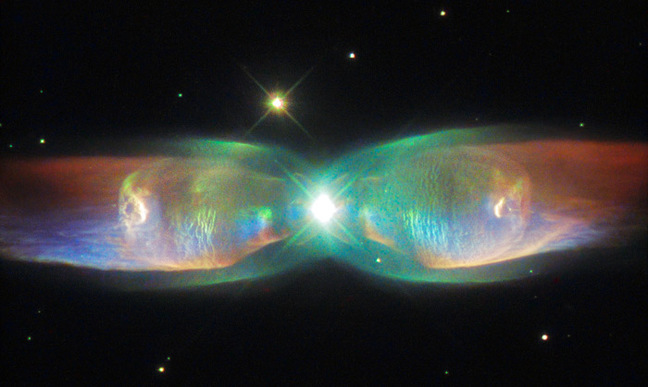 Astronomers estimate the interaction between the two, as they circle every 100 years or so, is the cause of the "wings of the butterfly". The European Space Agency (ESA) explains: "It is believed that a white dwarf orbits its partner star and thus the ejected gas from the dying star is pulled into two lobes rather than expanding as a uniform sphere."

The exposed remnant core of the moribund larger partner is what illuminates the "iridescent" gas lobes, which, based on measurements of their ongoing expansion, were created just 1,200 years ago.

Within the lobes, ESA notes, are two faint blue vein-like patches thrusting horizontally outwards. They may not seem like much, but they are actually "violent twin jets streaming out into space, at speeds in excess of one million kilometres per hour".

These too appear to be a result of the binary stars' interaction. "These jets slowly change their orientation, precessing across the lobes as they are pulled by the wayward gravity of the binary system," the agency explains. ®