Humanity reached a new low point last Monday, 24 August: on that day a billion of your fellow homo sapiens logged on to Facebook, which subsequently decided humans can't be trusted to do their own shopping.

Zuck wrote: “This was the first time we reached this milestone, and it's just the beginning of connecting the whole world.”

“I'm so proud of our community for the progress we've made. Our community stands for giving every person a voice, for promoting understanding and for including everyone in the opportunities of our modern world.”

Zuck reckoned cracking the billion barrier continued Facebook's quest to create “stronger relationships with those you love, a stronger economy with more opportunities, and a stronger society that reflects all of our values.”

Might one of those values be imitation as a form of flattery? We suggest that because Facebook has revealed “M”, a personal assistant for its Messenger app.

M's boss David Marcus explained that the code “completes tasks and finds information on your behalf. It's powered by artificial intelligence that's trained and supervised by people.” The result is interactions like the ones depicted below, apparently. 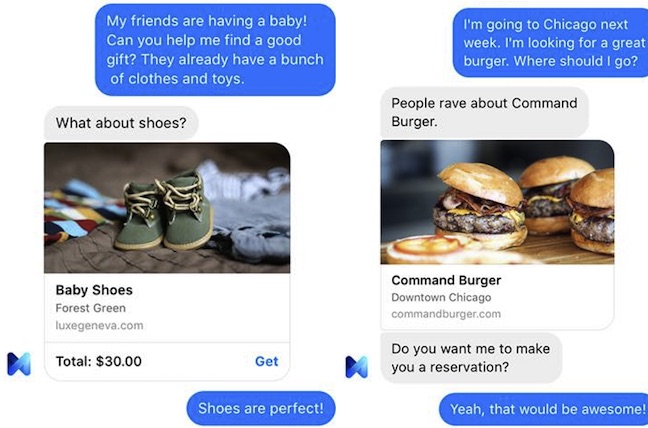 Facebook said “M” differs from the likes of Siri and Cortana because it “can actually complete tasks on your behalf. It can purchase items, get gifts delivered to your loved ones, book restaurants, travel arrangements, appointments and way more.”

Which sounds a lot like Facebook finding a way to take a cut from a heap of transactions its billion-a-day members conduct.

M is in beta for now, with no promises about when it will be released or explanations about how Facebook plans to secure a restaurant-booking bot accessible to billions. ®

Well, until they find out that you've left, but at least they won't be immediately notified of your every move
Offbeat10 Aug 2022 | 24