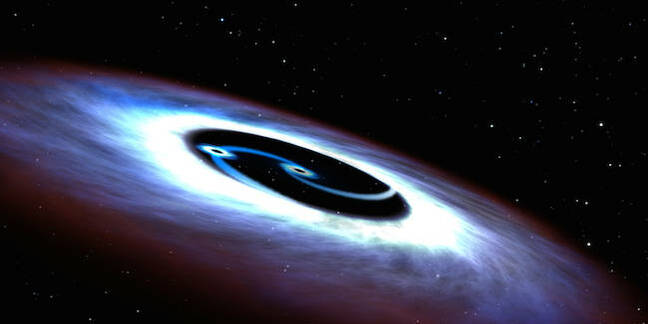 Scientists have spotted two central black holes raging and skating around each other in Markarian 231 (Mrk 231) – the nearest galaxy to Earth that hosts a quasar.

The binary black hole could collide in just a few 100,000 years from now, predicted astroboffins who made the discovery using NASA's Hubble Space Telescope.

"We are extremely excited about this finding because it not only shows the existence of a close binary black hole in Mrk 231, but also paves a new way to systematically search binary black holes via the nature of their ultraviolet light emission," said the National Astronomical Observatories of China, Chinese Academy of Sciences' Youjun Lu.

The Mrk 231 galaxy is located 581 million light-years away from Earth.

A paper with the catchy name of A Probable Milli-Parsec Supermassive Binary Black Hole In The Nearest Quasar Mrk 231 was published in Astrophysical Journal this week.

The dancing, ferocious black holes – weighing in at 150 million times more massive than our Sun and four million times the mass of 'Ol Sol respectively – have thrilled boffins.

Quasi-stellar-objects, or quasars are understood to be extremely rare phenomena that occur when enough matter falls into the accretion disc around a supermassive black hole to generate enormous energy.

This latest find suggests that quasars "may commonly host two central supermassive black holes that fall into orbit about one another as a result of the merger between two galaxies." ®

The light has only taken 13 billion years to reach us